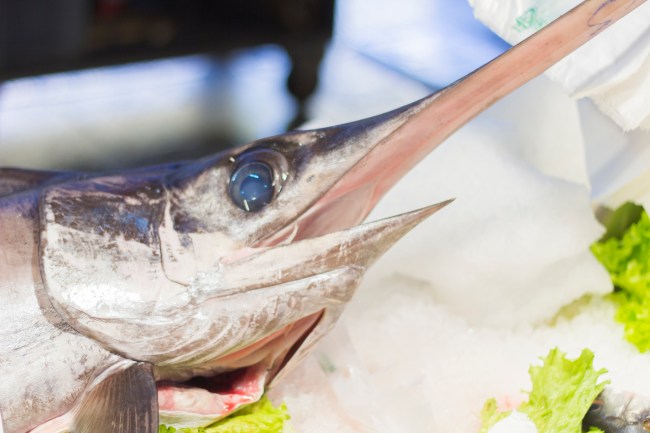 It’s nice to know that some fortunate fishermen were out there having the time of their lives last weekend while I was driving 1,400+ miles up the eastern seaboard and hating life.

This group of anglers landed the fish of a lifetime and they caught the largest swordfish ever landed in a fishing tournament in the southeastern United States. The absolutely gargantuan swordfish has a 101-inch short length measurement and it tipped the scales at a mind-blowing 558-pounds.

To put the size of this fish in context a little bit, this 600-pound swordfish caught by Captain Nick Stanczyk in Islamorada last year is one of the largest swordfish ever caught in the state of Florida. Though, after you see the pictures you’ll easily understand just how massive this creature is.

I caught wind of this tournament-record 558-pound swordfish when I was scrolling through Instagram and passed by one of my favorite accounts from @captbouncer. He shared a few pictures and a video of this unbelievably large swordfish.

Capt. Bouncer was fishing with John Bassett, John Barfield, and the legendary RJ Boyle who is world renowned for making some of the best off-shore fishing tackle around (and art!). The RJ Boyle studio in Lighthouse Point is where all serious anglers in South Florida go to load up on the best game-fishing tackle.

Suffice it to say this boat was loaded up with experienced fishermen and catching this record 558-pound swordfish wasn’t an accident.

Here are some photographs of this massive fish which popped up on social media over the weekend as word spread that a swordfish fishing record was nabbed:

@BouncersDusky33 Nickel Swordfish Tournament out of Hillsboro.
We had the only catch.
Two hour fight.
This is the biggest swordfish caught in a tournament in the southeastern U S A
558 pounds 151 inches long Damn! @_Darcizzle_ RT pic.twitter.com/ZEsvJMwJJW

I look at that fish and think ‘holy hell, fishing is an expensive hobby’. There are just so many expensive moving parts that went into catching that fish.

READ NEXT: The 25 Best Tasting Fish In The World, A Very Unscientific Ranking

You need a boat large enough (with a wench?) to hoist a fish that size up onto the deck and a boat like that can cost as much as you want to spend. Tens of thousands of dollars in custom rods, reels, and tackle. There’s the expensive bait you can purchase for tournaments or you can spend hours (days?) the week before a tournament fishing for bait. Then there’s the fuel you’re burning all day looking for fish.

Now, multiply that countless times for avid fishermen who fish multiple tournaments throughout the year, every year, for an entire lifetime. This is a multi-million dollar hobby when it’s done right.

As a side note, if any of you bros out there live in Southeast Florida, have a boat, and want to take me on a daytime or overnight swordfish trip sometime this Fall or Winter then holler at me. I’m just across the state in Sarasota and will happily tag along on the trip and share pics + video on the BroBible Instagram.