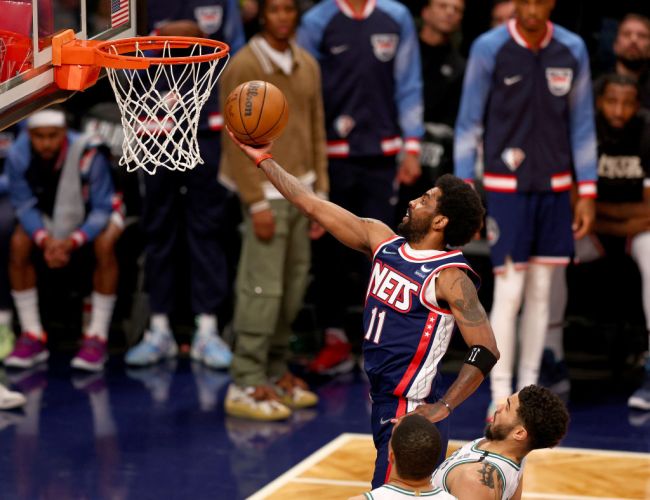 Kyrie Irving and the Brooklyn Nets still haven’t been able to reach an agreement to keep Kyrie in Brooklyn. They are still trying to work out a deal to keep him with the team, but it seems he already has a plan if they fail to come to an agreement.

According to ESPN’s Adrian Wojnarowski, Kyrie has a list of 6 teams that he wants the Nets to consider for sign-and-trade deals if they can’t come to an agreement. Those 6 teams are the Los Angeles Lakers, Los Angeles Clippers, New York Knicks, Miami Heat, Dallas Mavericks, and Philadelphia 76ers.

ESPN Sources: If Kyrie Irving can’t reach an agreement to stay with Brooklyn, he has a list of teams he’d like them to consider on sign-and-trades, including Lakers, Clippers, Knicks, Heat, Mavs and 76ers. None of those teams have cap space to sign him without Nets’ help.

Those are teams who Irving has interest in, but he isn’t necessarily a priority for all of them, sources said.

It’s difficult to picture Kyrie ending up with the 76ers after the way James Harden’s time in Brooklyn ended, but the other 5 teams are all interesting options for Kyrie.

The Knicks have been searching for a point guard for years and Kyrie would give them one who would make them a playoff team again.

A reunion with LeBron in LA would give the Lakers an upgrade at point guard who fits better with the team’s core and is a few years younger than Westbrook.

A move to the Clippers would give Paul George and Kawhi Leonard the 3rd star they’ve been missing as they’ve repeatedly fallen short of expectations.

Kyrie could go to the Mavs and create one of the league’s strongest backcourts alongside Luka Doncic after the Mavs just made it to the Western Conference Finals.

The Heat just came within 1 win of their 2nd NBA Finals appearance in the last 3 years, but don’t have another star to play alongside Jimmy Butler. Kyrie could be that star.

Whatever ends up happening with Kyrie and the Nets, his decision on next season is sure to have a major impact on the landscape of the NBA for next season.