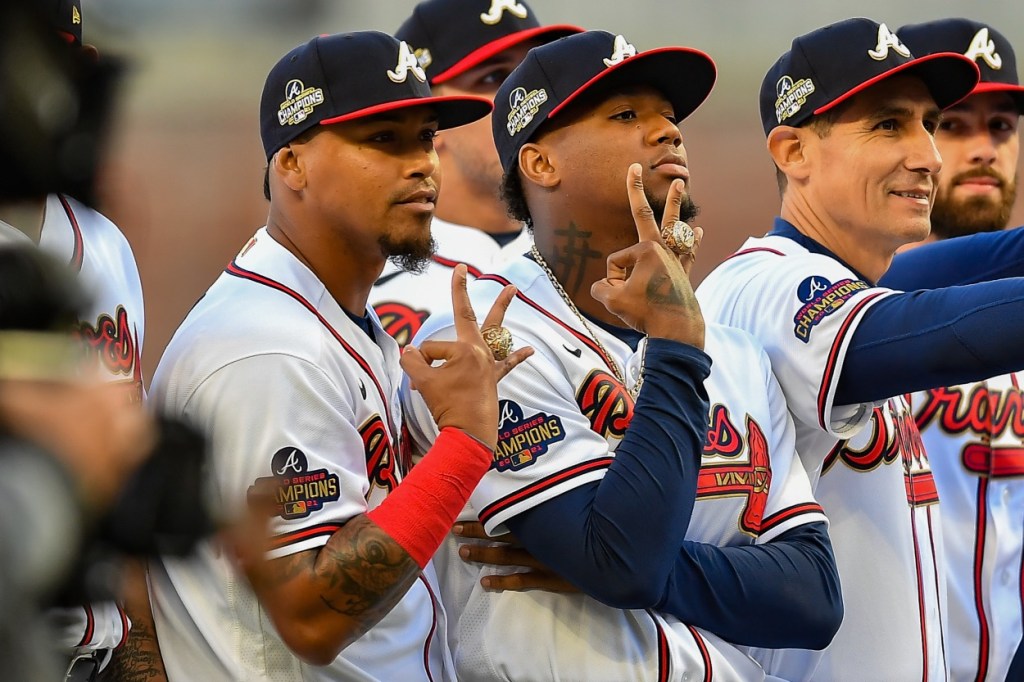 The reigning World Series champion Atlanta Braves debuted their new hardware over the weekend and blew fans away. Following recent trends across pro sports, the new Atlanta Braves World Series Rings feature incredibly thoughtful and unique details that pay tribute to the organization’s past and present.

Instead of just throwing pictures of the rings at you and writing about how there are 755 diamonds, 4 custom-cut rubies, 4 princess-cut rubies, 11 round rubies, and a white pearl I thought I’d break this out into the seven details that make this ring so special.

Hank Aaron Tribute: On the left side of the ring there are 22 emerald-cut diamonds and 22 more on the right side, totaling 44. That was, of course, the number worn by Atlanta Braves legend Hank Aaron.

‘A’ Logo: The Atlanta Braves’ iconic ‘A’ logo is on the ring made up of 18.71-karat white gold. That number represents the year 1871 which is when the Braves organization came to exist. Atlanta Braves manager Brian Snitker sad “that ‘A’ in the middle to me is just really special. This ring, I could go on and on. Everything is something in that ring. Everything has a meaning.”

Diamonds Within The ‘A’ Logo:

Within the iconic ‘A’ logo in white gold, there are 150 diamonds that represent the 150 years of Atlanta Braves history.

Mini Model of Truist Park: Inside the Atlanta Braves World Series Rings there are miniature models of the Braves’ new Truist Park. In the park there are 11 rubies that are in the stands where each of the 11 home runs hit by the Braves during the World Series landed in the seats. The mini stadium is also illuminated by micro LED lights inside the rings.

I can’t THANK the @Braves Organization enough for giving me and my fellow broadcasters #WorldSeries Rings. They considered us part of the team and surprised us. Simply blown away!!! #FIRSTCLASS pic.twitter.com/GpaiF0ults

The Pearl Joc Pederson famously wore a pearl necklace throughout the MLB Playoffs last year and it was a talking point during every World Series broadcast. The 2021 Atlanta Braves World Series Rings feature a single genuine pearl within to represent Joc’s necklace. You can read all about Joc Pederson’s pearl necklace and why he wore it by following that link.

7.30.21 Inscription The seventh incredibly thoughtful detail of the 2021 Atlanta Braves World Series Rings is an inscription that reads 7.30.21. That was the date of the MLB’s trade deadline last season and a HUGE turning point for the Braves’ success last season.

For more on the new Atlanta Braves World Series Rings you can follow any of those Instagram or Twitter embeds above to check out details and pictures on the Braves’ social channels.