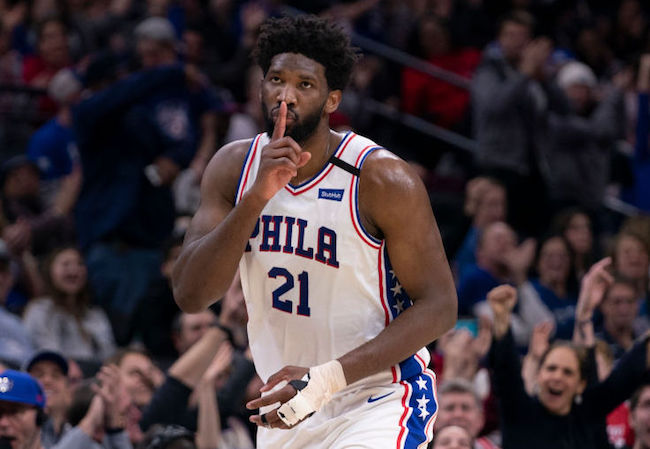 Fans of the Philadelphia 76ers have been endlessly asked to trust The Process that was implemented by former GM Sam Hinkie when he was hired to oversee the team in 2013, a term he coined to describe the longterm plan the front office had as it attempted a much-needed rebuild.

Hinkie didn’t stick around long enough to see his vision realized,  as the 76ers finished in the basement of the NBA standings during his three years at the helm before he was ultimately replaced by Bryan Colangelo (who also found himself without a job thanks to a bizarre scandal concerning the anonymous Twitter accounts his wife used to criticize the team).

It took a while but it appears The Process has been coming together over the past two seasons, as the 76ers have made a couple of playoff runs as the crew of players they’ve assembled do what they can to bring a championship back to Philly for the first time since 1983.

One of the biggest factors in the team’s turnaround has been Joel Embiid, who was drafted by the 76ers in 2014 and fully embraced The Process to a point where he stole the phrase when coming up with a nickname for himself.

Philadelphia is currently sporting a 34-21 record and sitting in fifth place in the Eastern Conference but its season has had its fair share of ups and downs—including a rocky start to the month of February, where it dropped its first three games and Embiid found himself getting criticized for his underwhelming performance by Shaquille O’ Neal.

Shaq going off on Embiid, calling him soft😂pic.twitter.com/x1Ep8AY1QZ

It appears Embiid has heard the criticisms loud and clear, and on Monday, he addressed them by borrowing a quote from Harvey Dent in a post on Twitter.

"You either die a hero or live long enough to see yourself become the villain.” #TheProcess pic.twitter.com/m5EPaKcsfb

On Tuesday, the 76ers took on the Clippers in Philadelphia and Embiid got an interesting welcome during player introductions, as NBA Twitter seemed to come to the consensus that more than a few 76ers fans booed him (the boos in question weren’t exactly deafening but I’ll let you decide for yourself).

However, it didn’t take long for Embiid to get back into the favor of those fans, as he soaked in some applause after scoring the first two of the 26 points he’d ultimately put up in a winning effort that also saw him record a clutch block on Marcus Morris shortly after they exchanged pleasantries near the end of the fourth quarter.

After being booed during his intro, Joel Embiid got the home crowd on its feet early 😆

EMBIID AND MORRIS GOT INTO IT 👀 pic.twitter.com/heEVwLW7po

Following the 100-103 victory—where Embiid was greeted with applause when he checked out at the end of the game—the 76er addressed the rude welcome he received and said he had nothing but love for the city of Philadelphia.

Joel Embiid on Philly: “I love my city. … I’m back to being a good assh–e.” pic.twitter.com/xRLdkieox2

Thanks to that interview, I propose we lobby Embiid to change his alternate moniker from “The Process” to “The Good Asshole.” I know it won’t happen but a man can still have hope.