Being A Toronto Maple Leafs Fan Seems Annoying As Hell: Only 96 Playoffs Tickets Sold To Public 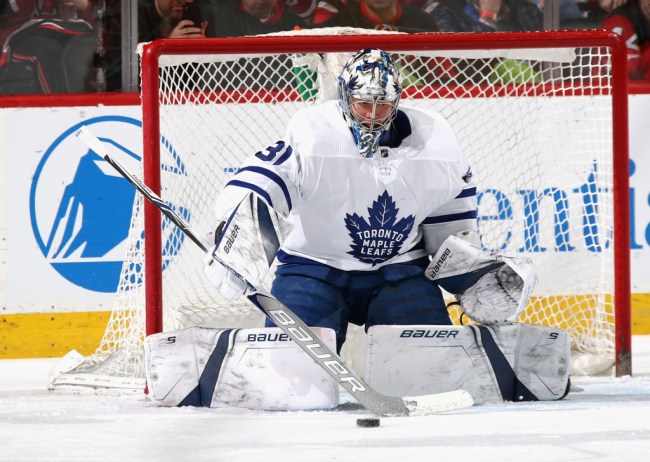 The Toronto Maple Leafs begin their quest for the Stanley Cup tonight in Boston. They’ll play another game in Boston on Saturday before heading back to Toronto for Game 3 on Monday where fans who aren’t CEOs or season ticket holders have virtually zero shot at getting into the game.

On Monday, there were two “presales” giving first dibs to Maple Leafs insiders.
At 1 p.m. season ticket holders (who already have tickets) got first crack at several hundred extras.
Then at 3 p.m. fans enrolled in the Leafs Nation fan club were granted access to just over one hundred more tickets using a special promotional code.
In total, 672 tickets were put up for sale on Ticketmaster.
By Tuesday at 10 a.m. when those “pre-sales” were over and the box office reopened to the general public, only 96 seats were left over, priced from $175 to $754 per seat. Many of those were near the back rows, with obstructed views or single seats — with only two pairs on offer. (via)

Season ticket holders always get the chance to purchase playoffs tickets before the general public. Then, it appears as if VIPs and business got a crack at it. Then the fan club (which requires an annual fee)…When it was all said and done, only 96 seats were available to the general public for purchase.

I see only two ways to reconcile with this if you’re a Toronto Maple Leafs fan: (1) you watch games on TV and accept that you only see them on TV or (2) you buy season tickets and get into the scalping business to supplement your tickets. You sell enough of the games each season at a grossly marked up price to pay for the handful of games you attend.

I’m a fairly devoted Tampa Bay Lightning fan in the sense that I watch every game on TV and make it to 5-10 games a season. I’m not a season ticket holder so I had to buy tickets when they went on sale to the public last Friday and I was able to snatch up 100-level seats to Games 1 and 2 for under $150/ticket before fees….I cannot even begin to imagine what being a Toronto Maple Leafs fan is like if you’re not a season ticket holder. The re-sale price of STANDING ROOM ONLY tickets to Game 3 (Toronto’s Home Game 1) is over $200 right now.

Leafs bros, I feel for you. I might hate your team but I truly feel for you as fans. I hope you get out of this round and can afford to travel elsewhere in the East to see your team for cheap.