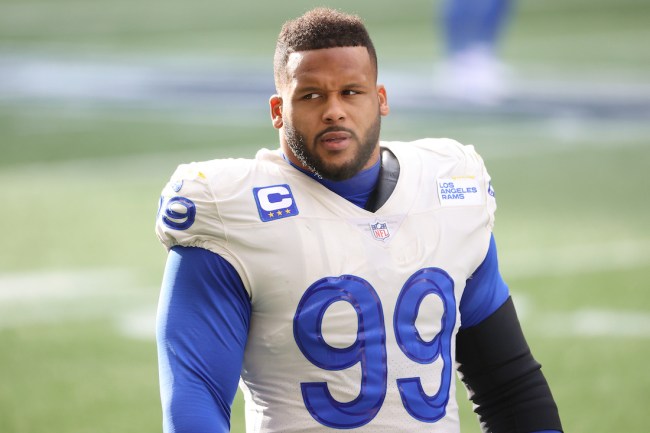 Anyone who saw the victim from an apparent Aaron Donald fight earlier this week saw a man who was brutally beaten, with the 26-year-old man, DeVincent Spriggs, suffering serious injuries. Images of the damage to Spriggs’ face quickly made the rounds on social media, with the victim having sustained a concussion, 16 stitches, a broken eye socket and a broken nose, according to his attorney Todd Hollis.

But a new report from Aaron Donald’s lawyer, Casey White, argues that the Los Angeles Rams superstar didn’t do anything wrong, and that surveillance video supports such a claim. In fact, White went as far as saying that video of the incident — which took place in Pittsburgh on the night of April 10 and into the morning of April 11 — shows the NFL star helping DeVincent Spriggs from sustaining even further injuries. The video can be seen below.

EXCLUSIVE VIDEO: Surveillance video appears to show #NFL star Aaron Donald run over and try to break up assault. I just talked to Donald’s lawyer who says his client came to the rescue. #WPXI pic.twitter.com/0sXKjrMJs9

Making his first public comments regarding the Aaron Donald fight with sports radio station 93.7 The Fan in Pittsburgh, Casey White detailed the incident from the defendant’s side, describing what the surveillance video above shows really happened that night.

Per the Pittsburgh Post-Gazette:

“He actually saved Mr. Spriggs from further injury,” White said. “It’s fantastic, from a defense attorney’s perspective, to be honest with you.”

He said Donald attended a crowded gathering at a private residence above a bar on East Carson Street, one that included many people he didn’t know. Ten minutes after he arrived, White said, Donald felt something jab him in the back, and it turned out to be an elbow from Spriggs.

Later, when Donald and his older brother, Archie Donald Jr., went outside, Spriggs was still there. Spriggs began walking toward Aaron Donald and yelling again, with an object in his right hand, one that Donald believed might have been a gun, White said.

“We have the surveillance video, and we have five corroborating witnesses at this point,” White said. “And we have more that are coming out of the woodwork.”

According to witnesses, after DeVincent Spriggs was booted from the party, he waited around to threaten Aaron Donald, even heaving a bottle at him — which grazed the head of the Los Angeles Rams’ star — resulting in what White described as the moment “when all hell breaks loose.”

“Aaron then breaks free from the restraints — and this is all on video, so I’m not making this up — he then goes to the pile where this melee is taking place,” White said. “He starts tearing people off, protecting Mr. Spriggs.”

White said five to 10 other people could step up to testify on behalf of Donald, but the most significant evidence is simply there on the tape, per White, who believes that Spriggs should write Donald a thank-you note for preventing the beating from going on another few minutes.

Donald’s attorney also added that, even after the brawl took place, his client didn’t remember much of the incident by the next morning, saying Donald only admitted to waking up with a bump on his head. Following the allegations from DeVincent Spriggs, however, the Los Angeles Rams’ star knew he needed to hire an attorney, cooperate with police and rely on the facts to make sure his name was clear from any wrongdoing.

“The first thing Aaron said to me is, ‘I hired you to make this go away — quickly — because I didn’t do anything,’” White relayed.

‘I’m not paying anybody anything. You and I can walk to the police department and tell them the story. Get the video, get the witnesses, I didn’t do anything. I just want to go to the weight room and not have anybody ask me about this situation, because nothing happened.’”

Adding one last twist to all this drama? According to Casey White, he believes Spriggs should write a thank-you note to Donald for helping him avoid worse injuries than he already sustained. That’s quite the request, but, should the surveillance prove the defense is right and the All-Pro NFL player did nothing wrong — and, in fact, helped break up the melee from escalating even more — maybe he will get a letter of thanks.