Aaron Hernandez’s Fiancee Spoke To Dr. Phil About The Suicide, The Gay Rumors, The Note And Much More 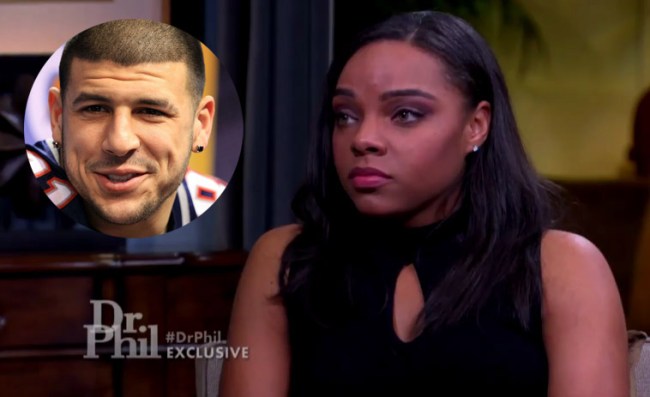 Aaron Hernandez’s fiancee Shayanna Jenkins-Hernandez spoke to Dr. Phil on his show Monday and Tuesday and the two of them left no stone unturned.

Everything from whether or not Hernandez really killed Odin Lloyd, to whether he actually committed suicide, to rumors of his having a gay lover and the notes that he left behind were all hit upon and more.

For starters, Jenkins-Hernandez told Dr. Phil that she doesn’t believe Hernandez was actually involved in the murder of Odin Lloyd.

However, she did discuss a box that allegedly contained the murder weapon, which Hernandez asked her to dispose of. She says that his request didn’t seem odd and she wasn’t curious to know what was inside the box.

As for Hernandez allegedly committing suicide, Jenkins-Hernandez says that she doesn’t believe it and never would have even suspected it.

She also discussed the note Hernandez left for his daughter, whom she says Hernandez loved very much.

As far as whether Hernandez did commit suicide so his family could get $6.5 million from the New England Patriots? She doesn’t dismiss it completely.

Then, as for the many rumors that Hernandez was gay and had a prison lover, Jenkins-Hernandez isn’t buying it, calling the claims a “crock of bull.” Especially since she says she has never even heard of Kyle Kennedy.

“If Kyle Kennedy was such a close friend, and Aaron was telling him he wanted to hang it up, he would still be here because Kyle Kennedy should have, you know, poked that lightbulb in somebody’s head and been a true friend and stopped it,” said Jenkins-Hernandez.

She also shared what Hernandez’s last words to her were before his death.

Basically, like many of us out here, she just wants some definitive answers…

… and for Aaron to be remembered as a better man than most believe him to have been.

“I want him, one, to be known as innocent because he was,” said Jenkins-Hernandez. “I just want him to be known for what he is instead of what people are speculating him out to be from what they see on TV. They want to make him out to be this monster, and he’s not. I just think that it’s time for Aaron to be free.”

Maybe some day, we will all get some of those answers and can finally put this whole sad saga to bed once and for all.