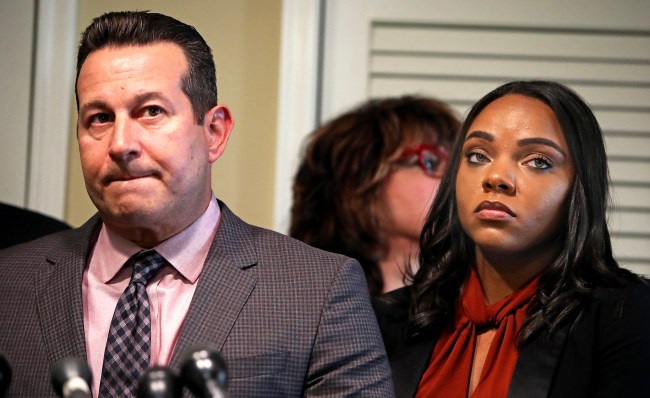 The Netflix documentary Killer Inside: The Mind Of Aaron Hernandez, released this week, has been a hot topic of conversation after revisiting the events surrounding the arrest, conviction and death of the former New England Patriots tight end. Two key figures in the documentary were Hernandez’s fiancee Shayanna Jenkins and attorney Jose Baez.

Hernandez was convicted in 2015 for the June 2013 murder of Odin L. Lloyd, the boyfriend of his Jenkins’ sister, but was found not guilty in the killing of Daniel de Abreu and Safiro Furtado in Boston in July 2012.

Hernandez was also allegedly linked to other violent crimes including a double shooting that took place in Gainesville, Florida on September 30, 2007, the 2013 shooting of Alexander Bradley in Miami, and two incidents in California in 2013 in which his fiancee Shayanna Jenkins called police on him.

On April 19, 2017, five days after attorney Baez got Hernandez acquitted of the murders of de Abreu and Furtado, the 27-year-old was found dead in his cell after committing suicide by hanging.

The families of de Abreu and Furtado eventually brought a wrongful death lawsuit against Hernandez’s estate, which was settled out of court.

Jenkins also filed several lawsuits in the wake of Hernandez’s death on behalf of their daughter, including lawsuits against the estates of the three men Hernandez was accused of murdering.

On September 21, 2017, Jenkins with attorney Baez announced they had filed a $20 million lawsuit against the New England Patriots and the NFL. The case was thrown out of court on technicalities.

This week, both Jenkins and Baez issued responses to the Netflix documentary.

“I don’t give a damn about what some lame ass documentary has to say about Aaron,” Baez wrote on Instagram. “I knew him, they did not and while he was far from perfect, they are not even close to the truth. People have no idea how documentaries are made, the truth is usually found on the cutting room floor. These producers lied directly to my face, so I don’t expect their money making scheme to be much better. #ripchico #baezlawfirm #aaronhernandez.”

“I wanted to let all of you sweet sweet souls know I have tried to read every message sent on IG and through email (positive and negative)…” Jenkins also wrote on Instagram. “The amount of support and positive energy is again unreal! I’m sure you will all understand how imperative it is to take some time away from social media.”

Jenkins also posted this image to Instagram with the caption, “Give me the strength 🙏.”

On September 15, 2017, four days prior to announcing her lawsuit against the NFL and the Patriots, Jenkins wrote, “My thoughts are heavy today – this being one of my hard days . I’m sitting here thinking how can I be so lucky but so hurt . Lucky to have a daughter to remind me of your smile and great personality, and hurt to realize I’ll never speak to you again ! Everyday I wake up in pain and realize this is a nightmare that will never change . God only knows I try everyday to pick up these broken pieces but the challenge remains extremely difficult. What I’ve known for years has now vanished although I’m reminded and told to keep strong … the task at hand remains traumatic! However , I know what you would’ve wanted was for me to be that girl that made you smile … the one who will ride until the end ( which I will ) ,that thought has been my motivation to strive as a better mother and a better person for our future . Until I see you again please know not a man in the world can replace you ! I love you my angel !!! ❤️❤️❤️#mybestfriend #mylover #mysoulmate #Aviellesdaddy #amanofhisword #Oursuperman.”

What a sad, sordid story.