Aaron Judge Comments On The Juan Soto Rumors, Says It Would Be ‘Fun To See Him In NY’ 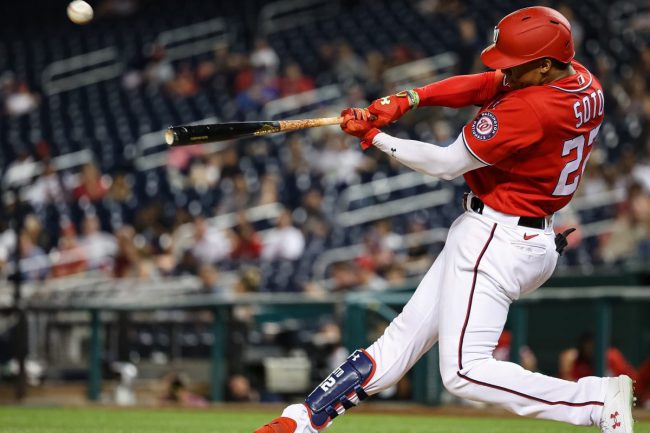 Juan Soto could wind up playing for a new team in the not-so-distant future. The star outfielder recently turned down a 15-year deal worth $440 million with the Nationals. Now, rumors are beginning to swirl that he’s on the chopping block.

The slugger is hitting .250, smacking 20 homers through the first half of the year. That performance was good enough to land him a spot in the All-Star Game.

He was asked about the possibility of being traded while in Los Angeles for the All-Star festivities. Soto says it’s an “uncomfortable” position to be in, with uncertainty surrounding his future.

“A couple of weeks ago, they were saying they’d never trade me. Now, all of these things are coming out… You don’t know what to trust.”

With the potential of being traded looming large, a handful of possible suitors are beginning to become more evident.

Most link Juan Soto to one of the teams in New York, with multiple outlets noting the Yankees and Mets as top contenders. So, it was only a matter of time before a few players from the Big Apple were asked about the possibility of adding Soto as a teammate.

New York Yankees star Aaron Judge was asked about the possibility of adding Juan Soto to the roster, and he was nothing but complimentary of the outfielder.

"Juan's a special player. It would be fun to see him be in New York."

“Juan’s a special player. He’s a special talent all around. I could sit here and talk about everything he does on the field, but he’s also a leader, too, at such a young age… He’s going to help whatever team he goes to win a lot of ball games. I would hate to see him go to a team that we’ve got to play down the stretch. It would be fun to see him be in New York… He’s definitely a game changer.”

Having Juan Soto in New York would make the Yankees even more deadly. They already own baseball’s best record and seeing Soto in the same lineup as Judge would certainly be entertaining.

We’ll have to wait and see what the Nationals’ next move is. If they don’t reach an agreement soon, Soto could be on his way out of Washington.