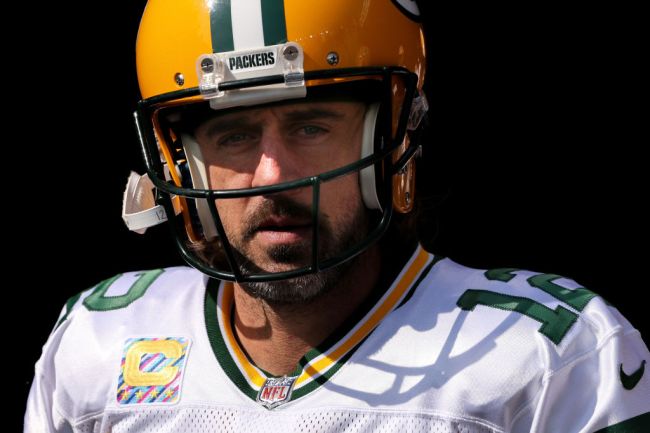 Aaron Rodgers is one mercurial dude, and I, for one, can’t decide if I want him to fail or adopt me.

Rodgers, in many ways, is unknowable.

There’s still so much up for debate about his estrangement with his family. His perceived aloofness. His relationship with fame. His leadership acumen. His legacy.

Rodgers’ frequent appearances on The Pat McAfee Show this season have pulled back the curtain a bit on Aaron Rodgers, The Human, and addressed the recent wave of ridiculous criticism after antagonizing Bears fans in the Packers win on Sunday.

The Packers QB, who is 22-5 against the Bears in his career, was caught on a hot mic yelling, “I own you! All my f**king life! I still own you!”, after scampering for a game-sealing touchdown late in the fourth quarter.

"I'm so fortunate for this platform because I think people get to see me in a different light.. I like to speak the truth & I'm not a part of this woke cancel culture that gets off on trying to silence people all the time" ~@AaronRodgers12#PatMcAfeeShowLIVE pic.twitter.com/Z3yZFaiqhx

“Back when I first got into the league, I feel like trash talk was a little more normalized and you didn’t have to apologize if you said something that offended a few people in a city.

I have a lot of respect for the city [of Chicago] and for the sports fans, it’s been a great rivalry over the years, but we have gotten the better of them for a while now. I don’t think I was saying anything that wasn’t necessarily close to the truth.”

Rodgers then went on to say that he does not have a problem with the scrutiny he receives given the job he has, but recognizes that there is this culture that exists that “gets off on shrinking people, keeping them small, keeping them in a box, quieting them through cancellation.”

"When I have dud games I don't have passion but when I make a statement after a touchdown I'm not a sportsman.. if the player abides by the rules of the game he's part of the game.. when you live above the game the game does not exist & that's where I'm at" ~@AaronRodgers12 pic.twitter.com/4bvjsXk5YK

“That is the state of our media and really our culture [at large], this woke PC culture.

There’s a PC woke culture that exists, and there’s a cancel culture at the same time and it’s based on people’s own feelings of personal miserability or distaste for their own situations or life. Or just the enjoyment of holding other people down under their thumb.

But when you engage in this culture, you’re immersed in it, and for me when I took time in the offseason to work on myself and to work on my mental status, I was being selfish, non-responsive, and entitled.

When these ridiculous narratives get drawn on about me about—pick a topic—from my family, to my leadership style.

And people start thinking, He hasn’t responded to it so it must be true, right?

When I finally respond to it to set the record straight, then I’m being sensitive.

I have been there, in a few dud games. People think I don’t have enough passion, I don’t care about what’s going on. When I make a statement after a touchdown run to put us up two scores, now I’m not a sportsman, now I’m making this sh*t about me.”

Rodgers then describes “the game” in which it is assumed he enter into, and the rules of the game are that he “acquiesce with the woke mob at all times.” “However,” he continues, “when you live above the game, the game does not exist. And that’s where I’m at.”