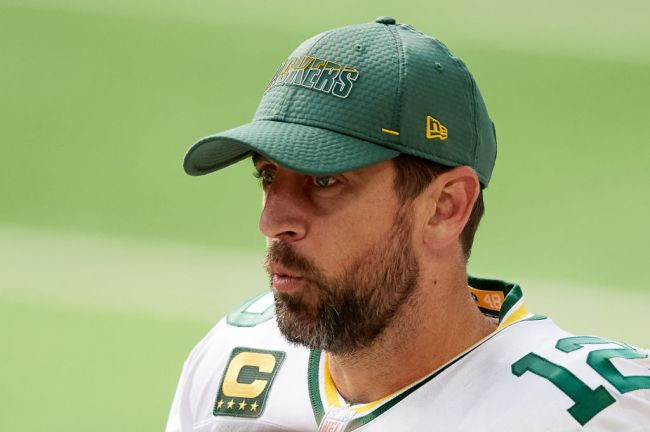 Packers signal-caller Aaron Rodgers began his run as the interim host of ‘Jeopardy!’ on Monday night and did a good job in the role. After the late Alex Trebek’s final episode aired on January 9th, the show has had a string of guest hosts handle moderating duties in his absence. Ken Jennings, Katie Couric and Dr. Oz were the first three in the role, and Rodgers began on April 5.

He's a 3-time NFL MVP, a Celebrity Jeopardy! Champ, and on Monday he takes over the Jeopardy! lectern! Tune in April 5 as Aaron Rodgers takes center stage. pic.twitter.com/5GPup20OSl

The 37-year-old is no stranger to the show. On a 2015 episode of ‘Celebrity Jeopardy!’, he defeated businessman Kevin O’Leary and former astronaut and current U.S. senator Mark Kelly to win $50,000 for charity. In his return, he was on the other side of the desk. He was also very successful as the host and even dropped a Curb Your Enthusiasm joke.

The best part of the night, as it usually comes, was during Final Jeopardy. The question was entirely unrelated to football, but a contestant who did not know the answer took the opportunity to make a joke at Rodgers’ expense.

During the NFC Championship, Green Bay lost to Tampa Bay 31-26 after facing an eight-point deficit with under five minutes left to play. The Packers had the ball on 4th-and-8 from the 28-yard-line and head coach Matt LaFleur chose to kick a field goal instead of going for it. They did not make a stop and the Buccaneers closed out a win.

The clue was: “ACCEPTING A LIFETIME ACHIEVEMENT EMMY, HE SAID, “JUST TAKE… 10 SECONDS TO THINK OF THE PEOPLE WHO HAVE HELPED YOU BECOME WHO YOU ARE”

As is expected, the answer to two-time champion Scott Shewfelt’s answer began with “who…?” but took an unexpected twist. He was too far behind the first place contestant’s total to make up the difference with a correct answer and took the chance to troll LaFleur’s decision to kick.

Early look: a contestant’s answer during Final Jeopardy: “Who decided to kick that field goal?”

Aaron Rodgers takes it in stride: “That is a great question.”

Rodgers told Packers beat writer Rob Demovsky that he could see the contestants write their answers on his podium monitor. So he saw Shewfelt decide to make the joke as it happened.

“For about 25 seconds, I’m watching him write this, and he thinks about the answer and says ‘F— it,’ basically, ‘I’m going to write this answer,” AR12 said.

His run goes through April 16th, and he has expressed interest in wanting to take over long term. He certainly wasn’t a flop on Monday, in fact he held his own very well.