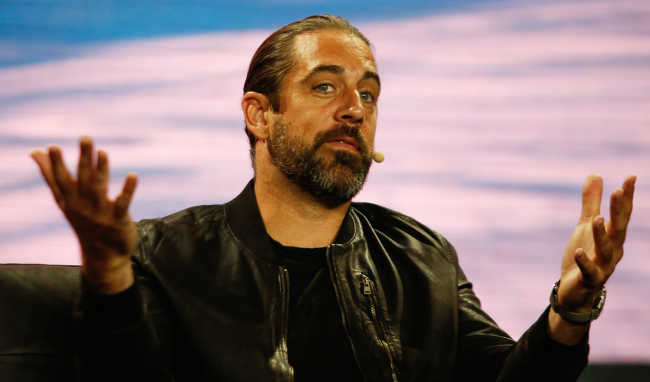 Green Bay Packers quarterback Aaron Rodgers, pictured above speaking at the Bitcoin 2022 Conference in Miami last week, is reportedly not planning on attending the team’s voluntary offseason program this summer.

According to Tom Silverstein of the Milwaukee Journal Sentinel, will for the second year in a row, skip the Packers’ voluntary meetings and workouts that lead up to June’s mandatory minicamp. This despite Rodgers signing a new $200 million contract extension this offseason.

Regarding Rodgers not showing up for the off-season: remember, he has a $50K workout bonus (as I first reported, thank you very much) that requires him to show up for 3 days. So, this is not news to the #Packers. If he wants to show up any other time, he can. It’s all voluntary. https://t.co/sciBVMkQIB

As many football fans will remember, Aaron Rodgers spent last summer traveling the globe, hanging out with his then fiancee Shailene Woodley and his new BFF Miles Teller rather than attend the Packers’ voluntary OTAs.

He also said that he deeply contemplated retirement and that he “was 50/50” all the way up to the weekend before training camp.

None of which seemed to bother him once the season began, at least on the field, as Rodgers completed 68.9 percent of his passes for 4,115 yards with 37 touchdowns and just 7 interceptions en route to his fourth NFL MVP Award and second in two years.

This year, however, Rodgers will have to adjust to the absence of his favorite targets Davonte Adams and Marquez Valdes-Scantling, both of whom left the Packers via free agency and both of whom he reportedly said he wanted to have on his team wherever he ended up playing in 2022.

Rodgers is is expected to attend the Green Bay Packers’ mandatory minicamp in June and see if, barring any new additions to the Packers, Robert Tonyan, Allen Lazard, Randall Cobb and Marcedes Lewis will be enough for him to be able to repeat the kind of numbers he’s been used to putting up over his career.

NFL fans, as they always do when it comes to Aaron Rodgers, had opinions his reported decision to skip Green Bay’s voluntary offseason program for the second year in a row.

"Team guy" right there !
And don't tell me "it's voluntary"
You just received a HUGE contract, your best WR was traded - which you knew was going to happen as you were told by mgmt & you still signed.
You have teammates you could be working with and you're not going ?

It seems to turn out OK tho. Continuous first round byes in the playoffs and MVP awards.

Voluntary is just that, optional.

Sure, he could prolly use some reps with his new WR but there’s plenty of time for that and AR has already mastered the role of QB so nothing to see here

Yeah, there's a TON of "dedication" at that address right there alright!
Rodgers got his pay day & the 1st opportunity he had to show he's the leader of that team he says "Nah.. I'll pass".

Never been much of a "lead by example" guy.