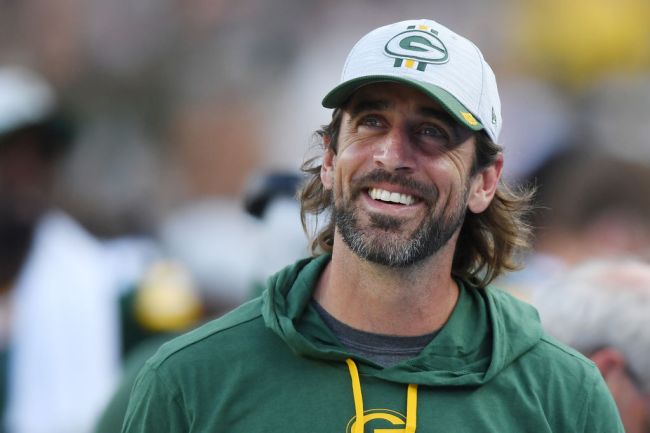 During an appearance on the Pardon My Take podcast, Green Bay Packers quarterback Aaron Rodgers said that he “doesn’t find it funny” when people joke about how his public opinion of the COVID vaccine might have impacted others.

While appearing on the latest episode of Pardon My Take, Rodgers and the show’s hosts — Dan Katz and PFT Commenter of Barstool Sports — were talking about Rodgers’ instantly infamous “immunization” blunder.

As Katz admitted that he was one of the people who was being critical of Rodgers’ semantical tricks, PFT Commenter chimed to ask “how many people” he thinks he’s killed due to his stance on the COVID vaccine.

The hosts of Pardon My Take asked Aaron Rodgers “how many people do you think you’ve killed?” with his stance on the COVID vaccine

“How many people do you think you’ve killed? What’s your count?” PFT Commenter asked.

“I know you guys are just f***ing around but I don’t find that part funny. I really don’t,” a serious-sounding Rodgers replied.

Clip been smoking me all morning pic.twitter.com/rji7psIu3x

Rodgers’ interview on Pardon My Take comes just a week after the 38-year-old admitted that experimentation with hallucinogenics — particularly the wildly potent ayahuasca — helped him achieve “self-love.”

Regardless of how you feel about Rodgers personally, there’s no denying that whatever he’s doing off-the-field has helped his on-the-field performance as he’s won the league’s MVP award in back-to-back seasons and will be one of the top contenders for the prize this year, too.

RELATED: Aaron Rodgers’ GF Blu Of Earth Calls Him ‘Courageous’ For ‘Changing History’ By Opening Up About Use Of Psychedelics