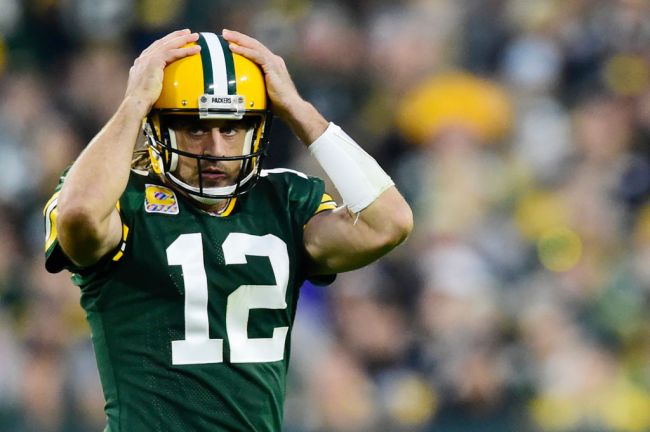 Aaron Rodgers had a big day against Washington on Sunday. The 37-year-old threw for 274 yards and three touchdowns with a 77% completion clip and led Green Bay to their sixth-straight win.

Rodgers did all this despite waking up with a sore back and threw a local hotel under the bus after the game.

“I do have to give a big shout out to [Packers Coordinator of Rehabilitation] Nate Weir and [Packers Chiropractor] Mike Zoelle,” he said in his postgame press conference. “I woke up this morning and my back was killing me, it was all locked up. And I came in here early, and I’m thankful for those guys taking care of me in order to go out and play today.”

Prior to every home game, Packers players usually stay at the Radisson Hotel and Conference Center in Ashwaubenon. It is unclear as to whether that was the case this past Saturday, but it is typically the team hotel.

In reference to his stiff back on Sunday morning, Rodgers tried not to blame his discomfort entirely on the hotel bed…

But… he blamed it entirely on the hotel bed.

“My back was a little stiff Saturday,” Rodgers added. “Maybe you guys know this or don’t know this, but there’s an antiquated procedural thing in our league where the most important night of sleep we stay at a hotel. And I don’t want to blame it on the hotel, it’s a nice hotel. But my bed at the house that I sleep in every other night of my time here in Green Bay would probably be a little bit of a better option, I think. And that’s just my opinion.”

Most teams in the NFL mandate a hotel stay on the night before a home game. By doing so, it keeps players from going out and staying up late.

Rodgers is clearly not a fan.

Perhaps his comments on Sunday are true. Maybe his hotel bed was incredibly uncomfortable and he woke up stiff as a result.

However, could it be possible that this is Rodgers’ attempt to get a green light to sleep in his own bed at home before games? If Rodgers stays in Green Bay next season, maybe a “sleep at home” option can be written into his contract?