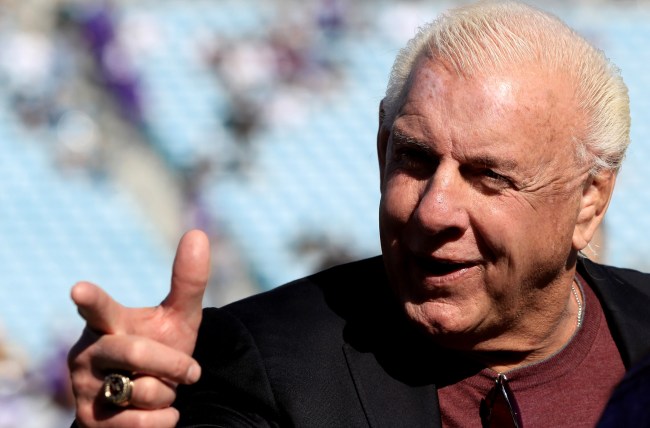 Professional wrestling Hall of Famer Ric Flair hasn’t won a major championship since Kevin Nash handed him the WCW World Heavyweight Championship on May 29, 2000 during an airing of Monday Nitro.

Despite that, now, at the age of 71, he might be more popular than ever, and many of his fans are people who weren’t even born when The Nature Boy was in his heyday.

Counted among his many famous fans are Bad Bunny, Offset, 21 Savage, Metro Boomin, Post Malone, Von Miller, Quavo, and Usher. He’s thrown out the first pitch at a Houston Astros game due to Josh Reddick’s love for him. Flair was invited to address the fans prior to a Hamilton Tiger-Cats playoff game. He’s spoke to the crowd at the 2018 game between the Georgia Bulldogs and the Tennessee Volunteers. Thrown out the first pitch at a Marlins game. And even spoke to the crowd at Carb Day at Indianapolis Motor Speedway prior to the Indy 500.

Another one of Flair’s biggest fans is Green Bay Packers quarterback Aaron Rodgers.

During Rodgers weekly appearance on The Pat McAfee Show, the future NFL Hall of Famer talked about the first time he met the wrestling legend.

While discussing a good friend of his, and one time backup with the Packers, Graham Harrell, Rodgers mentioned how big of a fan of the WWE Harrell was.

“So we’re in Carolina playing the Panthers and I’m at dinner with a buddy of mine from the Coast Guard who’s stationed out there. And [Harrell’s] at dinner with [former Packers QB Matt] Flynn, randomly, we’re just all at the same restaurant and our old coach Kevin Greene, if you know Kevin Greene, wild man, former Pittsburgh Steeler, former Carolina Panther, a former WCW wrestler, and just a beauty of a human,” Rodgers shared. “He’s having dinner at the same time with Ric Flair. So they’re one table. Flynn and Graham are another table and I’m at a third table. Just randomly we’re all there.

“Graham starts blowing my phone up, ‘You have to introduce, you, like, take me over to the table,’ and I’m like just, ‘F**k, go over there. You know Kev. You know KG. Just go walk over there and talk to him,’ right?

“And he’s ‘I can’t, I can’t, I, I need you, you gotta go with me.’ He’s only texted me like, the entire dinner. I’m like, all right, I was like okay uh you know, finishing up here, five minutes over at the table.

“So he’s like eyeing me, eyeing me, at the other table. I’m like, ‘What is this guy? Just leave me alone. What’s wrong with you?'”

So finally I’m like okay, I’ll take him over there so we walk over the table, KG sees us, ‘Hey, brother what’s up? You got to meet my good friend Ric Flair,’ and I was like, Hey, you know, really nice to meet you. I’ve been a fan, but this guy right here (points to his left), he’s a huge fan.’

“I introduced Graham and Graham clammed up like I’ve never seen anybody. I’m talking about paralyzed. He couldn’t get a word out.

“It was like one of those situations where, you know, it’s like you try to set your buddy up with a with a good-looking girl and you introduce him and you have to do all the talking between them because he just can’t get a word out. That’s how it was. I’m literally like, he freezes, like, can’t even shake his hand.”

Rodgers continued to talk about he did all the talking and Harrell didn’t say a word, but then after the meeting, Graham told Rodgers, “Oh, that’s the
greatest thing ever!”

“What just happened to you?” Rodgers asked Harrell. “Did you just go mute?”

Then, as if that story wasn’t entertaining enough, none other than Naitch himself, Ric Flair calls into the show.

Funnily enough, Flair said he remembered the night and that he told Kevin Greene, “I gotta meet Aaron Rodgers.”

What a life these guys lead.