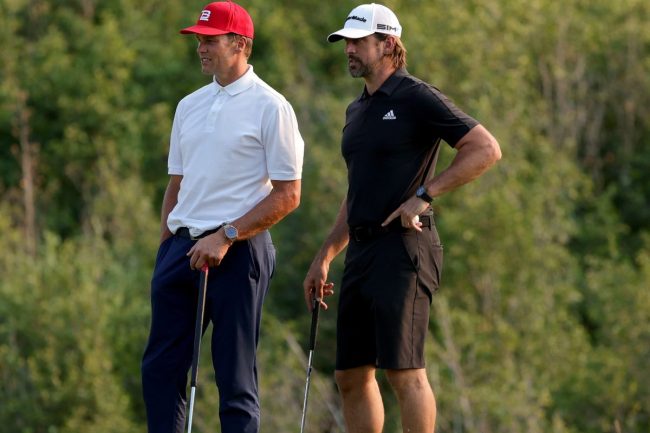 Aaron Rodgers and Tom Brady are the two best passers in the NFL. Rodgers is coming off of a second straight MVP season, giving him four for his career. He beat out Brady for the award last year, giving him a leg up as that category, 4-3.

But when it comes to the ring department, Brady has the sizeable advantage. He won six titles with the Patriots before bringing a Super Bowl to Tampa in 2020. Rodgers has one championship, leading the Packers to the Promised Land in 2010.

While the two have piled up accomplishments and accolades throughout the years, there’s one area of Brady’s NFL career that Rodgers doesn’t strive to reach – Age.

The Buccaneers’ signal caller turned 45 at the beginning of August as he gears up for his 23rd professional season. Rodgers is 38, soon to be 39 in December. He recently signed an extension with the Packers to keep him in Green Bay for another three years.

When he turns 41, he’ll have the option to stay with the team or retire.

When asked about the possibility of playing to the age of 45, Rodgers gave a very blunt answer.

Wisconsin sports anchor Stephanie Sutton asked Rodgers about the possibility of playing to age 45, like Brady. He replied with a swift “no.”

Now, that’s not to say he won’t play a year or two beyond his current contract, but don’t look for Rodgers to push the limits when it comes to his longevity in the NFL.

Related: Aaron Rodgers gives super-hippie response when asked about what motivates him