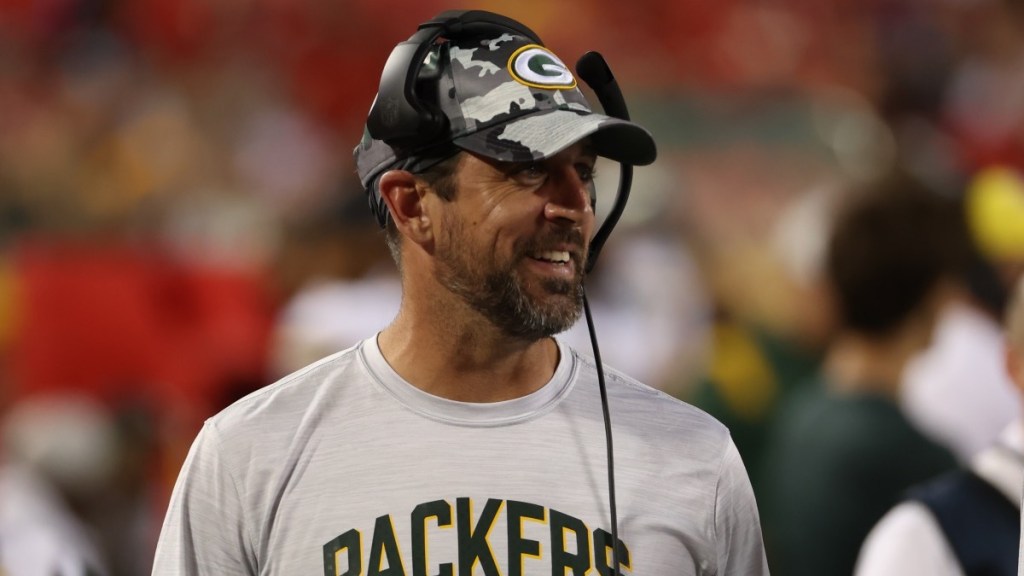 The unexpected appearance from Green Bay Packers quarterback Aaron Rodgers on The Joe Rogan Experience has had people talking for days. Aaron discussed everything from playing on painkillers to Britney Griner’s situation.

At one point in the lengthy conversation between Joe Rogan and Aaron Rodger, Joe asked him if he always thought he could play in the NFL or if it was once a pipe dream. That conversation quickly turned to Aaron Rodgers sharing a story about a vengeful professor at the University of California-Berkeley who tried to get Aaron expelled, according to him.

The video is below along with quotes from Aaron’s wild story. It all allegedly started when Aaron asked to be treated equally as his peers in the class and this evidently caused the professor to blow up on him. What happened next is pretty insane when you consider that Aaron Rodgers was nothing more than a young college student at the time being bullied by a professor.

The conversation starts with Rodgers admitting that playing in the NFL was mostly a pipe dream. But there as a moment during his time at Cal-Berkeley where he was dragged into an all out war with a professor who refused to treat him equally to his peers. Aaron dives into the story around the 1-minute mark.

“And there was like 15 kids on the team in that class, a class of like 120 people. And I wrote a paper and she (the professor) said ‘I cited incorrectly.’ So we had these breakout classes and of the 120 there’d be 6 classes of 20.”

He was just 20-years-old and looking to be treated the same as the other students.

“She had my paper out and I said ‘look, I’m not asking for a special privilege here. But the other 14 kid who got an F on the paper got to rewrite the paper and I didn’t.’ And she ripped me apart (saying) ‘you are an entitled athlete… you expect things to be given to you… what are you gonna do with your life?'”

Aaron Rodgers: “I said ‘I’m going to play in the NFL’ and she said ‘no way in hell, you won’t make it, you’ll get hurt, you’ll never make it. You will need your education and what I’ve seen from you is you won’t amount to anything.” And I said ‘watch me’.”

So big props to that Food Appreciation teacher for trying to ruin my life and my dream.”

Joe Rogan then astutely points out that this is just an ‘incredibly irresponsible’ way to communicate with ‘someone who is young and has their whole life ahead of them’. Because it 100% is. It’s not as if Aaron Rodgers was asking for special treatment, everyone in his class got the same chance to re-write his paper but him.

It’s also not as if he was some sort of repeat offender with a history of criminality. This is a Food Appreciation course at Cal-Berkeley. If there was any ‘teaching moment’ to be had, it’s that making mistakes is human and we should be able to learn and grow from those mistakes.

Instead, Aaron goes on to discuss how this teacher didn’t stop there. She tried to have him expelled and he had to read a public apology to her after dragging him through some ‘kangaroo court’, as Aaron Rodgers described it.

Rodgers went on to share that after the meeting with the teacher he went to practice, after that he met with the athlete’s liaison and explained what happened between him and the teacher. He just wanted to be treated the same as the other 14 students.

Props to him for at least sticking up for himself here. Most young students would feel powerless against a professor treating them unfairly. Aaron Rodgers says the school then ‘brought some heat down on her’ and that led to her having ‘a vendetta’ against him.

Rodgers says she wrote a 3-page paper at the end of the semester trying to get him expelled. Aaron then had to ‘go in front of the Judicial Affairs Board’ at Cal in some ‘kangaroo court’. He says he then had two options: (1) get expelled or (2) write an apology letter.

Aaron says the teacher ‘made up lies’ that he was late to class every day and that he was disruptive. He says he was ‘on time every day’. Rodgers tells Rogan that he as actively engaged in every class and the professor was just flat out lying.

If true, it’s awful. No college student should be unfairly singled out by their professors like that.

Some fans are now calling him Perc Rodgers 💀 https://t.co/rt34zQMYAx