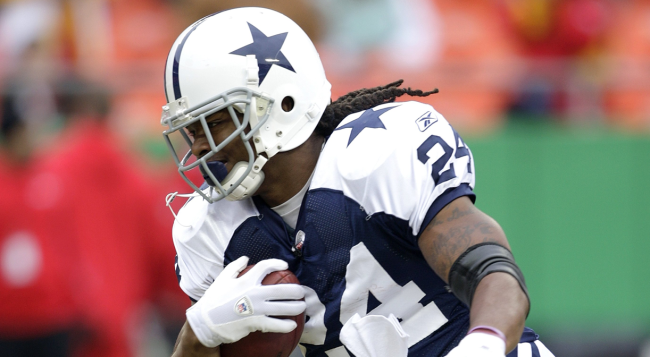 Former Dallas Cowboys and Chicago Bears running back Marion Barber III was found dead in his apartment by police in Frisco, Texas, on Wednesday.

He was just 38 years-old. Barber’s cause of death has yet to be announced, but he was discovered when officers went out on a welfare check. He would have been 39 on June 10.

I am truly heartbroken to hear the incredibly sad news of Marion Barber’s passing. He was a rare guy! Marion played the game with such passion! He had a deep-down love for football and it showed in everything that he did!

Former Dallas Cowboys head coach Bill Parcells said of Barber when reached for comment by the Dallas Morning News, “I hold him in high regard.

“I hate to bring up football now because that’s not important, but he was almost like a perfect player. In this respect, he could run, block, he could catch, he was tough and he was always there. So that’s what I’ll say about him.”

Parcells added, “I would say I found him to be a very nice, respectful young man. And I had a very high regard for him. He was like he could do everything you could ask him to do and he was always there.”

Among the media outlets to cover the surprising death of Marion Barber was ABC News which tweeted out a link to a story with the caption:

“JUST IN: Marion Barber III, the former Dallas Cowboys running back who scored plenty of touchdowns without recording a 1,000-yard season, has died, the team said Wednesday. He was 38.”

While ABC News was technically correct, Barber rushed for 4,780 and scored 53 touchdowns during his seven-year NFL career, many fans found the reference to be disappointing and insensitive considering the man had just passed away.

Surprised you didn’t bring up the fact that he threw exactly zero touchdowns in his NFL career. 🤦🏻‍♂️🤦🏻‍♂️🤦🏻‍♂️

How does one get to a place where that is what they tweet about the death of a person?

how is this still up

Interestingly, despite all of the backlash, the ABC News tweet about Marion Barber was still live as of 11:10 a.m. ET on Thursday.