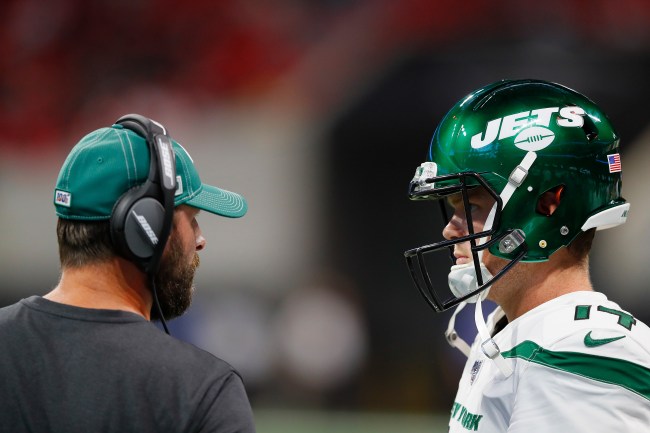 For those of you who were put through the trauma of watching the Patriots 33-0 humiliation of the Jets on Monday Night Football, I know can’t be the only one who half-expected the NFL to issue a running clock in the second half like a lopsided pee wee game.

It was painful. And I’m a goddamn Patriots fan. But I never feel good about witnessing a murder.

Sam Darnold was notably terrible. The sophomore quarterback finished with one of the worst passing performances in Jets history, setting a career high in his college and pro career with five turnovers, throwing four interceptions and losing a fumble. His 3.6 passer rating was the worst since J.J. Jones’ 2.7 in 1975, ESPN reports.

Despite his putrid performance on the field, arguably the most embarrassing moment of Darnold’s night came from a mic’d up clip he muttered to himself after his third turnover.

The clip immediately went viral, and even Patriots players caught wind of the omission and had themselves a hearty chuckle.

“He did? That’s the boogeymen…Sorry, he really said that? That’s crazy for him to say that. That makes it real. That’s crazy. I can’t believe he said that.”

Turns out, neither could Jets head coach Adam Gase.

During a Tuesday afternoon press conference call with the New York media, Gase expressed his anger toward ESPN for airing his young quarterback’s vulnerabilities.

Gase said they “will be looking into it pretty hard” when asked about having players mic’d up in games anymore. “It bothers me. It bothers the organization.” #nyj

Gase on ESPN mic’d up deal: "I don’t know how we can allow our franchise quarterback to be put out there like that.” Says they will reevaluate their cooperation with network. #nyj

As NY Post columnist Andrew Marchand points out, Gase should be directing blame to both NFL Films and ESPN. The way it works is NFL listens to the mic’d up footage and uses its discretion to decide which footage gets passed along to ESPN. It’s ultimately ESPN’s decision to air it.

Or, option C: Be better.