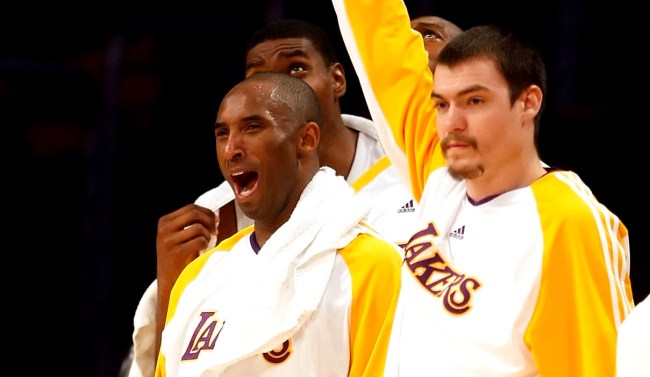 Adam Morrison may have had a pretty nondescript NBA career after becoming a March Madness legend at Gonzaga, but unlike 99.9 percent of us he still got to play in the NBA.

Which means that since Morrison played in the NBA from 2006 to 2010 for the Los Angeles Lakers and the Charlotte Bobcats, he got to do something that 99.999 percent of us never get to do: rub elbows with two of the greatest NBA players in the history of the game – Kobe Bryant and Michael Jordan.

This week Morrison appeared on a couple of different basketball podcasts and shared his favorite stories about the two NBA legends.

During his interview on the Rejecting the Screen podcast, Morrison recalled how kind The Black Mamba had been to him as he was struggling with life after being released by the Lakers in 2010.

“I wasn’t playing obviously, career was in the shit,” Morrison recalled. “My personal life wasn’t great. I was really depressed. I was basically a hermit in my own house. I didn’t go out in the community at all, and if you did it was people asking you, ‘Why aren’t you playing?’ I was 26 at the time or whatever I was, No. 3 pick, just a really low point in my life, and I got a text from Robert Lara, the Lakers security and one of Kobe’s best friends. He said ‘Hey, what’s your address, I’ve got something in the mail for you.’

“I get the package, and it’s an autographed jersey from Didier Drogba, who was my favorite player,” Morrison continued. “I’m a Chelsea fan. It was from Kobe. A game-worn jersey, signed by Didier Drogba, ‘To Adam, Best Wishes.’ I always thought Kobe made a phone call, which would be fine, still cool as fuck, unbelievable.”

The kicker is that Morrison wasn’t 100 percent sure it was Kobe who made the gesture happen, but found out for certain on the night Kobe Bryant died in the helicopter crash.

“The night he passed, I’m scrolling through, reading everything, and I’m emotional, and on Chelsea’s Instagram page,” said Morrison. “It’s him with Didier Drogba holding up a jersey, and it says, ‘To Adam, Best Wishes.’ So, he went up to my favorite player, got it signed for me without even asking, and sent it to me when he knew I was low. It’s unbelievable. I still have the jersey. That’s what Kobe Bryant was. He’s just one of those dudes who understood his own aura and could sense when people were down.”

Obviously, Morrison had earned Kobe’s respect for him to do that for him, something Morrison said he got by “just playing hard in practice and not kissing his ass, if that’s the right way to put it. I think he was such a smart, highly intelligent person. He could tell if guys were kissing his ass and trying to buddy-buddy up to him. I just treated him a like a normal teammate and he treated me the same. If you showed up everyday and played hard and competed against him and put in the work, he loved guys like that.”

Morrison also appeared on the Battle for L.A. podcast this week and there he shared a great story about interacting with Michael Jordan as The GOAT was in the process of taking over the team.

“We used to have an unwritten rule in the league, and most teams did it,” Morrison recalled. “If your team played each other in basketball or football, it was an automatic $100 bet. So Gonzaga played Carolina in the Garden after my rookie year, and we won, and so I saw him at the Christmas party and was like, ‘Hey, you owe me $100!’ And I was kind of like joking, and he was like, ‘Oh yeah! No problem.’ And he pulled out like $8-10 grand out of his pocket.”

Morrison also shared a wild tale about a trip on the Bobcats team plane with His Airness.

“We used to play cards on the plane before all that crazy stuff in Washington went down,” said Morrison. “We’d play Booray. We’d play Texas Hold’em, and Mike, he barely flew with us, like I said, he wasn’t the GM. He wasn’t the owner. He was a minority owner then, but he flew with us on one of the road trips, and somebody asked him, ‘Hey, do you want to play cards with us?’ He was like, ‘Sure.’ But then we were like you can’t bring like $50,000 and bet everybody off every hand. We’re going to cap it at like a $1,000 bet a street, max.

“So, him and Gerald Wallace were in a hand, and I’m a poker player, so I don’t know if you guys are, but there was a straight draw, flush draw on the flop and you could tell Mike was drawing to something and Gerald bet $300 into him. Mike literally goes, ‘$300? I could watch two monkeys fuck for $300!’

“Everybody was fucking laughing and shit, but it was like $300? Okay. He probably had a gutshot or something like that. He was always cool, man. He really was. It was cool to be around him. He was a hero of mine growing up. That’s my Michael Jordan story.”