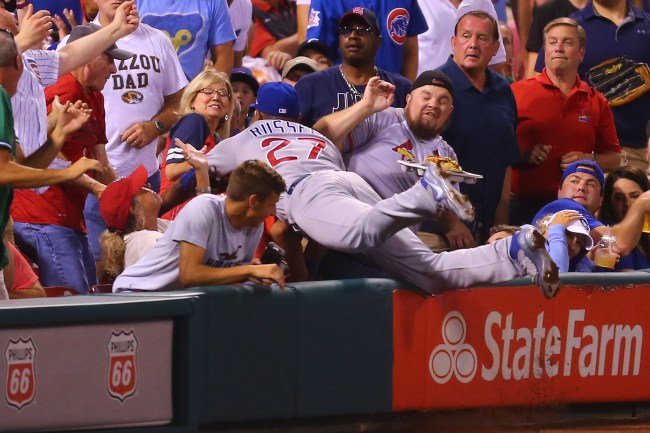 When you attend a baseball game, you have to be prepared for anything. There’s no telling what— or who— might fly into the stands at any time. However, sometimes you can only prepare so much before disaster strikes.

A St. Lous Cardinal fan learned this the hard way during last night’s matchup against the Chicago Cubs. In the bottom of the second, Jedd Gyorko lofted a fly ball towards the third base line, and Cubs shortstop Addison Russell took off after it before diving headfirst into the stands.

Russell was unable to snag the baseball, but he did come back with a souvenir: a handful of nacho cheese. He’d managed to knock a container of chips and queso out of the hands of a fan and onto the warning track. The incident prompted a wave of boos from the crowd, who were presumably mad that Russell ruined a perfectly good plate of nachos.

The shortstop realized the wanton destruction that he was responsible for and decided to make things right. He returned between innings with a fresh plate of nachos, proving there is still good left in this world:

As you can see in the video, the fan requests a selfie, and Russell happily obliges. The fan posted the photo on Twitter, earning thousands of retweets and the nickname “Nacho Man” in the process.

I still can’t decide which part of this picture is funnier: the lady photobombing or the fact that the nachos are blocking out the woman who was supposed to be in the frame. This is what true art looks like.

According to the Busch Stadium website, a plate of nachos goes for $7.25