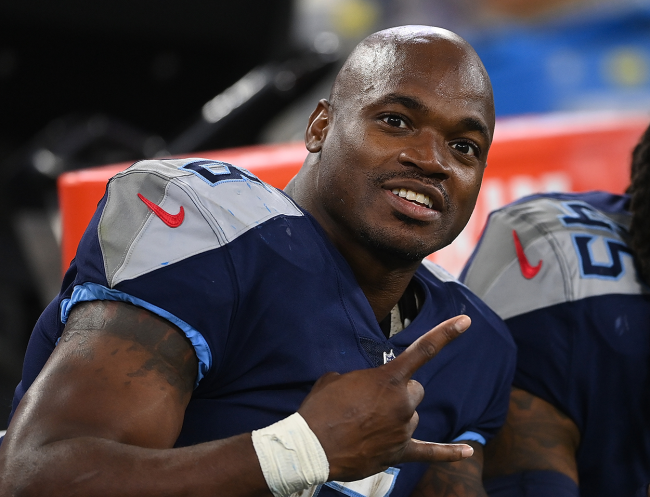 After signing with the Titans earlier this month, Adrian Peterson became the fifth-oldest active running back in NFL history. And with Derrick Henry likely out for the season, ‘All Day’ is in for a significant role with one of the AFC’s best offenses.

However, before he can become a dominant factor in Tennessee, he has a few things to work on first. Shaking off the rust is no easy task, especially for somebody who has not carried the ball 200+ times since 2019.

He had 10 carries for 21 yards and a touchdown against the Rams in his debut with the Titans last week, but his son was not impressed. Peterson spoke with the media on Friday and told reporters that he FaceTimed his 10-year-old son after the game.

During their conversation, little Peterson asked his father why he was running so high. Ruthless.

.@Titans RB @AdrianPeterson said he FaceTimed his 10-year-old son after the @RamsNFL game and he asked him: Dad, why were you running so high? Said he’s working on his technique.

Now, Chris Collinsworth was also discussing Peterson’s pad level during the Sunday Night Football broadcast. So there is a good chance that Peterson’s son picked up on the note.

Either way, when most people might be quick to praise their father, little Peterson holds his dad to a higher standard. He has seen what the former No. 7 overall pick can do, and what a dominant runner he can be. Getting his pads low and exploding through contact might be a big step toward a return to his younger years.

However, with that being said, Peterson is 36— so he surely is not as nimble as he once was. Wouldn’t it be great if he could turn back the clock, though?