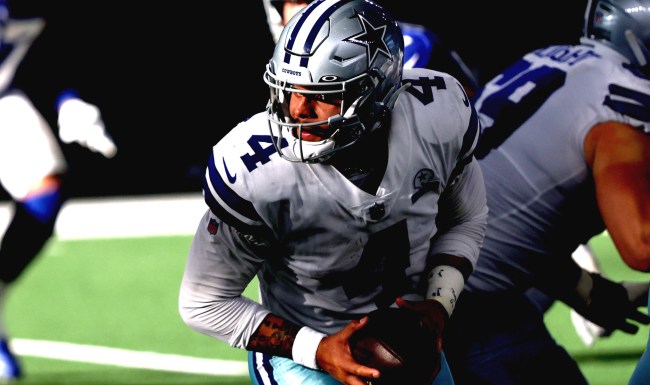 One of the bigger questions heading into the NFL offseason has to do with what the Dallas Cowboys are going to do with quarterback Dak Prescott.

Before his season-ending ankle injury, Prescott was putting up huge numbers having thrown for 1,856 yards and nine touchdowns, plus three running the ball, in the season’s first five games.

He was also working under the franchise tag as Cowboys fans eagerly waited for him to be signed to a long-term contract.

Fast forward to today and those fans are still waiting for that deal to get done.

Over the past month, we have seen Matthew Stafford and Jared Goff swap teams, we’ve heard strong rumblings about Carson Wentz and Deshaun Watson – both once considered franchise quarterbacks in their towns – getting traded, Ben Roethlisberger is talking retirement, Philip Rivers did retire, Aaron Rodgers has hinted that he wants a new deal to stay in Green Bay, Russell Wilson has been starting to talk like he’s got one foot out the door in Seattle, Jimmy Garoppolo isn’t the answer in San Francisco, Derek Carr, Matt Ryan, Sam Darnold and Tua Tagovailoa have all been the subject of trade rumors, Mitchell Trubisky and Drew Lock are still giant question marks, and who knows what’s going on in Jacksonville, New England, Washington and New Orleans.

So what are the Cowboys waiting for? They have their franchise quarterback, 27-year-old Dak Prescott, just sitting there. Not that you would know it from the hype video they released on Tuesday.

Dallas great Troy Aikman is wondering the same thing, and has a warning for the Cowboys.

“They’re not going to get very far without a franchise quarterback,” Aikman told the Dallas Morning News. “They’ve got that in Dak. I think the price tag went up. I think Dak’s leverage went up after this year.”

Should the Cowboys decide to franchise tag Prescott for a second year, Aikman believed that would be the end of Dak in Dallas.

“I think the Cowboys made a big mistake by not signing him sooner to a long term deal,” said White. “He’s proven himself in my book. He checks all the boxes.

“He’s a born leader. That’s the number one thing, that’s the one thing you can’t really teach a quarterback, is how to lead. The guys in the locker room follow him.”

On the positive side, Aikman does think the Cowboys will get a deal done with Dak.

“This has nothing to do with how much they like the player or whether they think he’s a franchise quarterback,” Aikman added. “It’s purely economics. My guess is they have a deal done and rightfully so.”