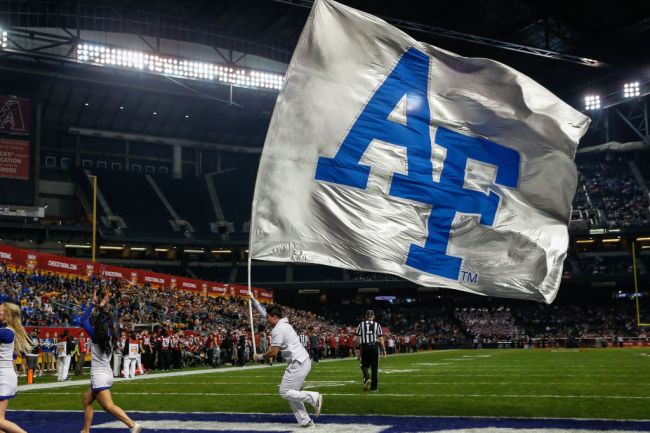 Air Force, Navy, and Army have worn some pretty incredible uniforms over the years, but the threads that Air Force will be wearing for its game against Navy on Sept. 11 are truly something special.

The Falcons shared a video on Thursday showing off their new uniforms that honor the B-52 bomber. Air Force is calling the uniforms the Air Power Legacy Series, and they’re magnificent.

The video is pure America.

As for the many special details on the team’s helmets, jerseys, and pants, the Air Force explained them as such:

The helmet is designed after the B-52s that flew in Operation Linebacker II and are painted in the Air Force SEA (Southeast Asia) camo, with USAF on one wing and the roundel on the other. The Strategic Air Command adorns the front right chest of the uniform while the name plate uses the orange outline with the airport codes for Andersen AFB, U Tapao and the 7th Bomber Wing patch to represent all former B-52 units.

The left pant leg features 11 B-52 plane silhouettes representing the 11 days of bombing during the conflict. The right-side pant leg has the tail flash of the plane and the number on each player’s pant leg matches their uniform number for the first time in the history of the series.

Navy Will Wear Special Uniforms For 9-11 Game As Well

Navy will be donning some special threads in the 9-11 game as well. The Midshipmen recently revealed their brand-new 2021 U.S. Marine Corps uniforms and they’re a sight to behold as well.