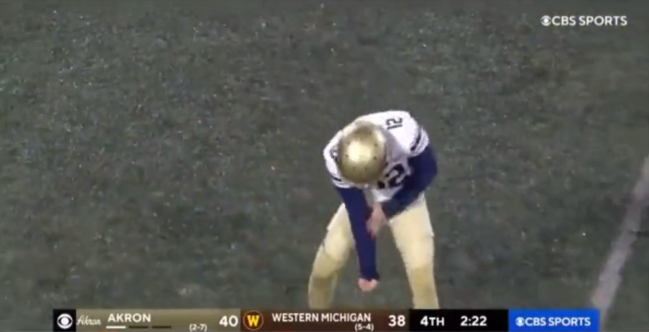 The University of Akron football team is having a difficult year. Although they boast wins over Bryant and Bowling Green (who beat Minnesota L O L), the Zips are 2-8 in 2021 and have struggled tremendously over the last three seasons.

That didn’t keep kicker Cory Smigel from going all-out with his celebration on Tuesday night.

After falling behind 24-14 at halftime, Akron battled back in the second half to take a late 40-38 lead over Western Michigan. To do so, Smigel nailed a 39-yard-field goal with 2:22 remaining in the game.

As the kick went through the uprights, Smigel could not have been more fired up. He dropped his arm out in front of him and tapped his forearm to let everybody know that he has ice in his veins.

The 5-foot-8, 150-pound redshirt sophomore from Ohio went ballistic. Upon reaching the sideline, he shared an incredible choreographed celebration with his head coach, tapping both feet and mimicking a golf swing.

Take a look at the all-time great special teams celly:

To make things even better, it is the team’s interim head coach, Oscar Rodriguez Jr. Because of the team’s poor results over the last three years, head coach Tom Arth was fired earlier in the week.

That means that, either Rodriguez and Smigel have been doing this all year, or the two came up with a field goal celebration during practice earlier in the week. Rodriguez had been named the interim less than a week prior and they’re out there going golfing.

Unfortunately, Akron ended up losing the game in the final minute— but it doesn’t take away from the glorious moment between Smigel and Rodriguez.