Alabama Basketball Is Must-See Basketball, Shot The Lights Out Of The Gym Against Maryland In March Madness 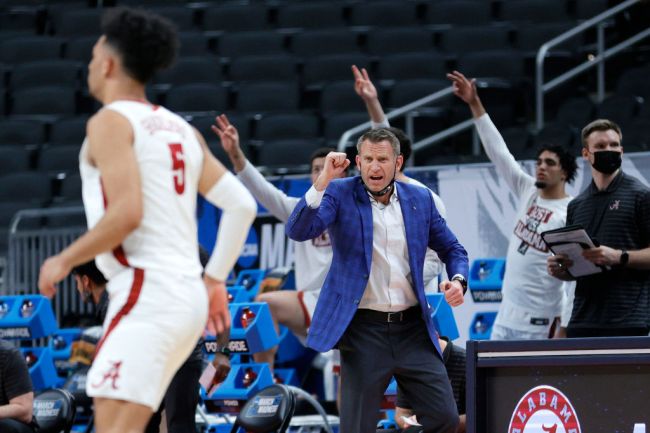 Nate Oats’ offense out-shoots everybody and he likes it that way. Alabama took 1937 shots during the regular season and 912 of them were three pointers, which was 300 more than Maryland, the school’s second round opponent in the NCAA Tournament. The Crimson Tide continued their blazing pace from beyond the arc and hit 10 of 27 attempts in a 96-77 win to advance to the Sweet Sixteen. Things were close for a moment until it became a race that the Terrapins could not win. Jaden Shackelford had a team-high 21 points in the game but John Petty was right behind him with 20, and three other players scored in the double digits.

On the other side of the ball, it wasn’t even that Maryland played horrible basketball or turned the ball over a lot. In fact, Alabama lost the turnover battle by two and only made three more shots than its opponents. The Terrapins even had four players in double digit scoring, but they simply could not keep up from beyond the arc. The Tide shot a ridiculous 16 (!!) three-pointers in the game, compared to 10 on the other end, which is still a lot. Oats’ run-and-gun offense broke a school record with 336 triples last season, before the year was cut short due to COVID-19, and followed it up with 340 and counting so far in 2020-21.

This puts us over last year’s program record for 3’s made in a season. We now have 337 and counting… #RollTide  | #BlueCollarBasketball
pic.twitter.com/204pgMtHxI

In just his second year, Oats has reached the Sweet Sixteen for the first time in his career. He had been to the Round of 32 twice before at Buffalo, and gone dancing three times while there, but now his red-hot snipers have a legitimate chance to win the national title. His philosophy revolves around getting up as many shots up from beyond the arc as possible in 40 minutes, pushing the pace at every opportunity his team gets. The Tide pull up from deep.

The SEC Champions will face 11-seed UCLA in the Sweet Sixteen for a chance to play either Florida State or Michigan. They play loud, shoot the lights out and have a lot of fun in the process. So long as they stay hot, there are very few teams who can match the deep-ball tempo.

The SEC puts two teams in the Sweet 16 with the win and Alabama will join Houston as the only two seeds. This year has been the craziest in history thus far, but it seems like the best teams in the country are beginning to click. With that being said, it only takes one cold shooting streak to take down the Tide and the Bruins held their opponents to 32.4% from three during the year.