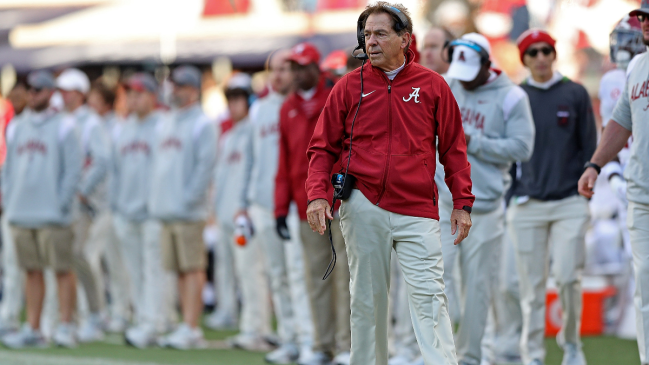 By Saban and the Tide’s standards, I think we can officially call that a drought.

But it’s not likely Bama has exactly fallen off a cliff or anything. The Crimson Tide lost to Georgia in the College Football Playoff championship game in 2022. They then went 11-2 and narrowly missed out on making the playoff this past season.

The Crimson Tide currently boast the top 2023 recruiting class in the country according to 247Sports and appears they have no plans on slowing down anytime soon.

Learfield Sports is the biggest name in the game when it comes to college sports multimedia rights. So it makes sense that it would be a perfect match for Alabama. The two have been partners for years and recently extend that partnership, according to Sports Business Journal’s Michael Smith.

Alabama has extended and broadened its multimedia rights agreement with Learfield out to 15 years in a deal that adds elements for name, image and likeness, new content and more access to data and analytics. Financial terms of the deal were not released, but it is believed to be one of the most lucrative in the country along with Ohio State and Texas, both of which are also Learfield clients.

Though Smith says the financial terms were not revealed. He does state that the previous deal, signed in 2014, was for 10 years and $160 million. He also reveals some of the details of the new deal, which show the Tide’s emphasis on succeeding in the world of name, image and likeness deals for college athletes.

The renderings of the The Advantage Center, which will serve as “a dedicated NIL Hub,” look ridiculous.

The two have extended their longtime partnership with a new agreement that adds a NIL hub called The Advantage Center.

It sure seems like Saban and the Tide are sick and tired of losing.