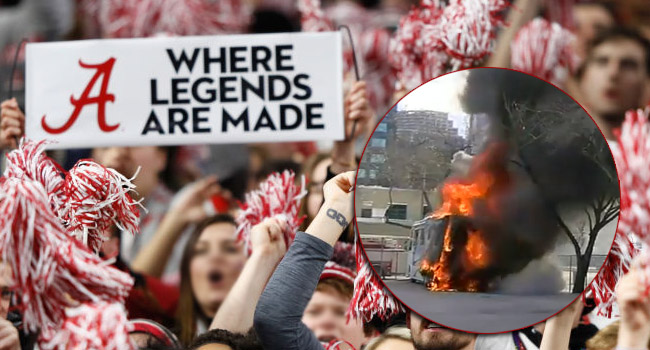 While the fourth-ranked Alabama Crimson Tide were roasting the top-ranked Clemson Tigers 24 to 6 on Monday night en route to the college football championship game against Georgia, another ‘Bama football-related fire had already flamed out in the Sugar Bowl parking lot.

An RV belonging to an Alabama fan caught fire on Monday morning near the Superdome temporarily closed traffic near the stadium. And it wasn’t just any little fire either. When you’re a ‘Bama fan it’s go big or go home all the time, right?

The New Orleans Fire Department arrived on scene and quickly extinguished the flames.

No one was injured, and the fan said despite the loss of her RV she will still be attending the game.

The fan did not want to be identified, but issued an on-the-record statement of “Roll Tide.”

Of course she did. What else would you expect out of a person from a state where Nick Saban received over 400 write-in votes for Alabama State Senator in December?

Guessing the fan won’t be able to afford tickets to the big game in Atlanta now that she’s short one RV. Not that most people could anyway.