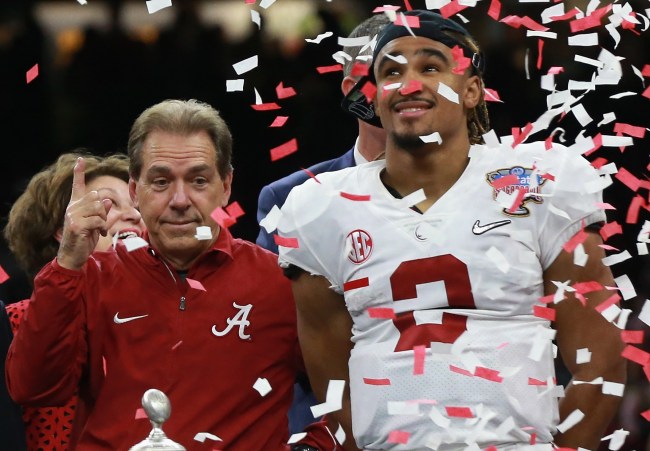 If you’re on the coaching staff at Alabama, money grows on trees. The entire Alabama coaching staff will make over $17 million before its all said and done this year, with assistant coaches making a combined $6.5 million. Nick Saban can find that between the cushions of his couch. Back in May, the 66-year-old signed contract extension worth $65 million over eight years that runs through 2025, and that doesn’t even include the $4 million bonus he received just for signing his name on the extension.

Granted, Saban’s outlandish salary doesn’t seem so inflated when you consider Alabama’s football program rakes in over $100 million per year, posting profits of just under $50 million annually, Chicago Tribune reports. With that said, it seems imbalanced especially when you consider Bill Belichick, arguably the greatest profession coach of all time, will make $7.5 million this year, millions below his collegiate friend.

Welp, Saban just got another fat direct deposit following Alabama’s 24-6 win over Clemson in the Sugar Bowl on Monday. The win earned Saban a $100,000 bonus for making the championship game, according to USA Today’s Steve Berkowitz. Saban could also earn another $100,000 if Alabama wins the championship over Georgia on January 8th. Berkowitz also reported that Saban has already earned $300,000 in on-field bonuses this season.

It should be noted that Saban’s Nick’s Kids Foundation which he runs with his wife Terry, has been a philanthropic powerhouse in the Tuscaloosa community. A few months back, the foundation donated a record $500,000 to 150 charities during its annual luncheon. The donation pushed the Saban’s total donations to $7 million during their time in Tuscaloosa.