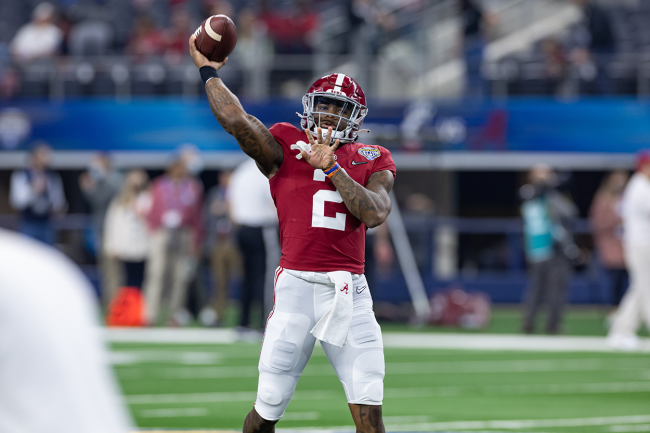 Alabama football is, once again, No. 1 in the vast majority of preseason college football rankings. The Crimson Tide is returning much of its roster from a year ago and, as is per usual, the players who have since moved on are being replaced by guys who are either equal in talent or better.

All Alabama does is rebuild and reload. Year-in and year-out.

A large part of the Crimson Tide’s success in 2022 is contingent on Bryce Young’s play at quarterback. The Heisman Trophy winner from a year ago will look to follow-up his career year with a national championship this fall before presumably going on to be a first round pick in the NFL Draft.

Behind Young, backup quarterback Jalen Milroe is making some noise of his own. The Texas-native is next in line at the position and made a strong impression during the A-Day game earlier this spring.

He looked really good during all four quarters.

Jalen Milroe can start for ALOT of college football teams. I’m just glad he’s one of ours. I can definitely see him starting next season if Bryce Young decides to declare for the draft after this season!!! #RollTide 🅰️🐘 pic.twitter.com/uxyZabZFoH

And his best throw of the day was an absolute dime.

Milroe, a four-star quarterback recruit in the Class of 2021, was the No. 13-ranked player at his position and a Top-100 overall prospect.

While Alabama quarterback Jalen Milroe’s strong on-field play is one thing, his size and strength is really turning heads.

Listed at 6-foot-2, 212 pounds, Milroe is essentially the size of most linebackers and built like a boulder. And that height/weight ratio might be understated, Milroe probably stands closer to 6-foot-3, 215 pounds of straight muscle.

In particular, Milroe’s arms are massive. He is jacked.

Enjoyed being back in BDS! #RollTide pic.twitter.com/i7xKKQSSrQ

Over this past weekend, Milroe and Young partook in Steve Clarkson’s annual QB Retreat in Santa Monica. It is a youth camp at which current and former college players and pros are often the counselors. That was the case for the Alabama signal-callers.

But when he was standing next to Milroe, he was totally dwarfed by his beefy backup.

God forbid something happen to Young, it appears as though Alabama would be in good hands. Should things go according to plan, Milroe and his massive muscles will be the starter in 2023.