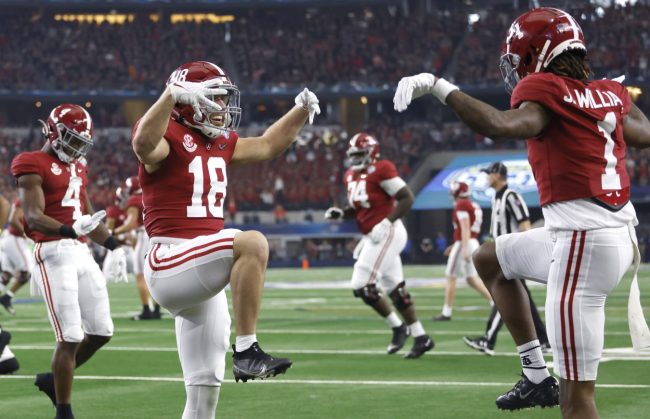 As Alabama gears up for a rematch against Georgia on Monday night, the Crimson Tide is leaning all of the way into the underdog mentality. Prior to the game, the team released an epic, Karate-Kid-inspired hype video.

Somehow, some way, Nick Saban has convinced his team all season that they are underdogs. Despite having only one loss, despite having won the national championship last year, Alabama truly believes that it has been counted out all year.

As a result, a unique celebration has become a staple within Tuscaloosa— the crane kick.

In the movie ‘Karate Kid,’ Daniel LaRusso is tasked with beating a much better opponent, Johnny Lawrence. LaRusso, the Karate Kid, is the underdog.

During the match, he uses the “crane kick” to beat Lawrence on an injured leg in the finals.

Alabama tapped into that scene for inspiration all year. Earlier this season, wide receivers John Metchie III and Jameson Williams debuted the ‘Crimson Crane’ celebration after scoring a touchdown.

Like LaRusso in the move, the celebration strikes a crane-like pose. It represents the underdog mentality that Saban has instilled within them and it has absolutely taken off.

Ahead of the College Football Playoff National Championship, the Tide fans started a movement on Twitter. In reference to the ‘Crimson Crane,’ fans added a karate gi emoji next to their names.

The full story behind ‘Gump Twitter’ can be found here. The team’s official twitter account, as well as the school’s athletic director and countless others have joined in.

Prior to the National Championship, the Tide is actually an underdog.

Depending on where you look, Georgia is favored by as many as 2.5 points. History is also in favor of the Bulldogs.

That could spell bad news for UGA as Saban gets his team ready for the game.

About 24 hours before kickoff, Alabama released its hype video. Inspired by the balance of the ‘Crimson Crane,’ it will have you ready to run through a wall.

Nick Saban and the Crimson Tide seek their eighth-straight win over the Bulldogs on Monday night. Will the “Crimson Crane” mentality be the difference?