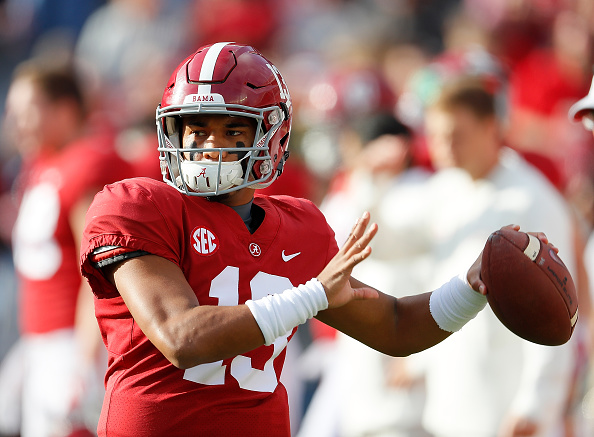 ​Tua Tagovailoa’s meteoric rise from backup QB to National championship winner and Heisman hopeful has been one of the best college football storylines in the past few years.

This morning during a segment on College Gameday, Tua’s storyline took a weird turn whe he casually spoke about his father forcing him to become a left-handed quarterback and how his dad would beat him with a belt if he played badly.

Tua Tagovailoa's Dad Used to Use a Belt on Him if He Didn't Play Well #RollTide #SECChampionship https://t.co/acwfpwAWXx pic.twitter.com/F8odVxTnML

The Internet was alarmed by how ESPN tried to frame Tua’s horrifying tales of father beating him as heartwarming when in reality they were pretty fucked up.

So to recap, Tua Tagovailoa’s dad:

Tua is an incredible talent and somehow seems to have a good head on his shoulders, but that is the absolutely worst type of youth sports parent.

Was that GameDay story about Tua’s dad threatening to beat his son with a belt if he played bad supposed to be heartwarming?

Spanking your kid because they did something wrong I can live with. I was spanked growing up.

Using the belt on your kid because threw an interception or had a bad game?

Very heartwarming story about Tua Tagovailoa and his family on @CollegeGameDay. It was a story of totalitarianism and an autocratic father beating his son with a belt for throwing interceptions. #ohana

So Tua Tagovailoa's dad beat him with a belt if he played poorly in high school? Seems like a nice guy. What a totally bizarre feature on College GameDay.