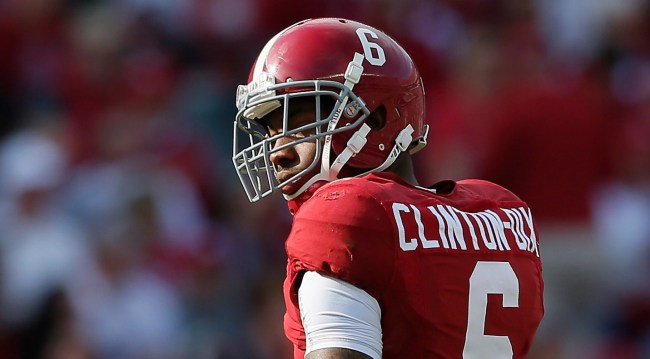 Listen. I get it. Colleges don’t want to get stuck with thousands of dollars in outstanding payments by people who have technically graduated and moved on from the school.

The year before, the Alabama football program had revenue of $108.2 million – $45.9 million of it profit.

In 2015, revenue was reportedly $95.1 million and the fiscal year before that, Ha Ha Clinton-Dix’s final year playing for the Crimson Tide, revenue was $95.3 million with a $53.3 million surplus.

So the university has made over $200 million in profit from the football program over the past five seasons.

… because he owed the school… one dollar.

I owe 1$ I can’t believe y’all been holding my degree for 100 pennies. I thought I didn’t graduate 👨🏾‍🎓 y’all dead wrong @UofAlabama for doing ya boy like this 🤣💰 pic.twitter.com/Pu06lielt7

Needless to say, reactions to this news were what you’d expect.

Send them .99 and see if they'll keep holding it for a penny

Feels so good to know my school is soooooo compliant.

Is it too soon to suggest you reach out to Felicity Huffman or Lori Loughlin to cover it? 🤭