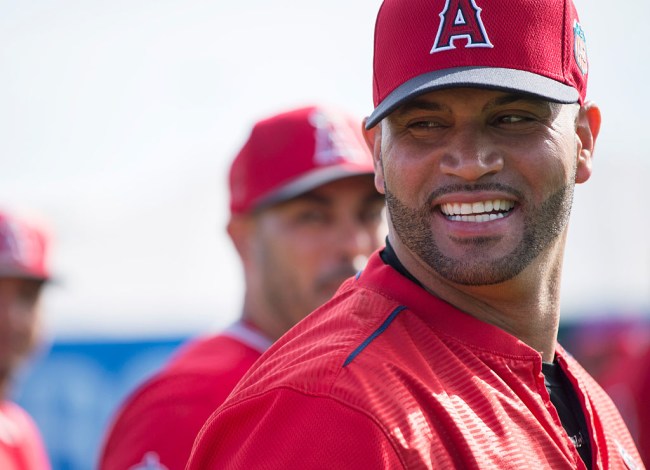 When my brother called me to tell me he was furloughed from his job a couple of months ago, I had to Google  “what does furload mean?” to figure out what the hell he was talking about but I feel like I now hear that word on an almost daily basis.

Most of the leagues that were forced to put their seasons on hold are currently pushing to get back into action, but until that happens, most of the people employed by them are bearing the brunt financially. Players and coaches who make millions of dollars a year may not be facing dire straits but there are plenty of other employees who are probably hurting for a paycheck.

Albert Pujols is one player that doesn’t really have to stress about his financial security, as, Baseball Reference estimates his career earnings to be around $314 million. So yeah, I think he’ll be fine for a little bit.

Pujols may have been one of the slowest players in Backyard Baseball 2003 but he’s still managed to have a pretty impressive career despite his virtual shortcomings, as he currently has 3,202 hits, 656 home runs, and a batting average of .300 to his name as he coasts toward an almost guaranteed place in baseball history in Cooperstown.

He might not be playing right now but that’s not stopping him from putting up some other impressive numbers, as The Los Angeles Times reports the slugger has set aside $180,000 to cover the salaries of employees of the Los Angeles Angels stationed in the Dominican Republic for roughly five months—a group that includes scouts in amateur and international departments, player development staff, and minor league coaches and coordinators.

I don’t want to throw anyone under the bus but I will now do exactly that by noting Angels owner Arte Moreno has a net worth of $3.3 billion. Pujols may be rich but he doesn’t even come close to that number. Moreno is the one who employs all these people who are not being paid right now, and with that kind of money, I don’t think it’s out of line to suggest he could figure out a way to pitch in.

Of course, it’s not my business to tell him what to do with his money, and hey, maybe he’s donating money to coaches and scouts privately. But if he’s not, it’s a damn shame he should be shamed for it.