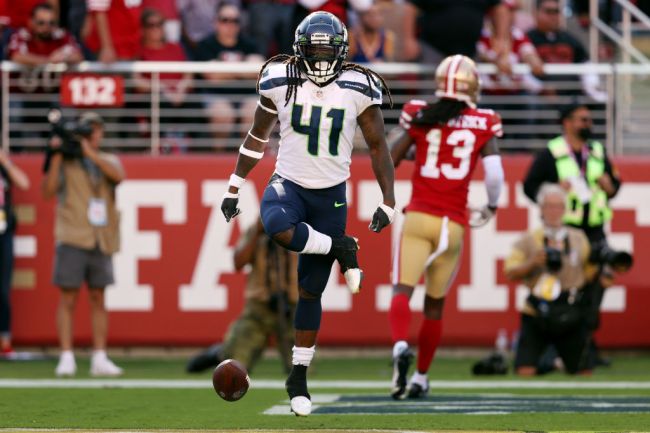 Seahawks running back Alex Collins has the best touchdown celebration in the NFL and it was on full display on Sunday. Each time that he enters pay dirt, the 27-year-old celebrates with his signature Irish jig.

Everything about the jig is perfect, but it’s even better when you know the backstory.

When Collins was four-star recruit in high school, his football coach’s daughter challenged him on whether he was quick, nimble and strong enough to try out Irish dancing. Not one to back down from a challenge, the Florida-native signed up for a class.

Much to his surprise, he not only loved it, but quickly recognized how helpful it was in building the strength and conditioning he needs as a football player. He has stuck with it over the last 10 years and his work has paid off.

Collins, who is in his fifth year in the NFL, has scored 18 touchdowns in 42 career games. And all 18 times, he hit the jig.

While he has broken out the dance multiple times on the field, he has also showed off his skill off of the field. He traded his cleats for some reel shoes in 2018 and performed an impressive routine to Ed Sheeran’s ‘Galway Girl’ during an appearance on the CBS show ‘MVP: Most Valuable Player.’

In addition to his celebration, Collins believes that Irish dancing has been crucial for his success. He is always on his toes and jokes that he has calf muscles like the Hulk from the training.

Not only does Collins apply his Irish dancing background to the field, but he has used his platform to support others. In 2017, the mother of a 12-year-old boy who was being bullied for his love of Irish dance reached out to Collins.

In response, Collins sent a message of support and later met him during a game to offer more words of encouragement.

Collins remains the No. 2 option in Seattle’s backfield behind Chris Carson and it’s always a delight when he has the ball in his hands. It’s even better when he scores.