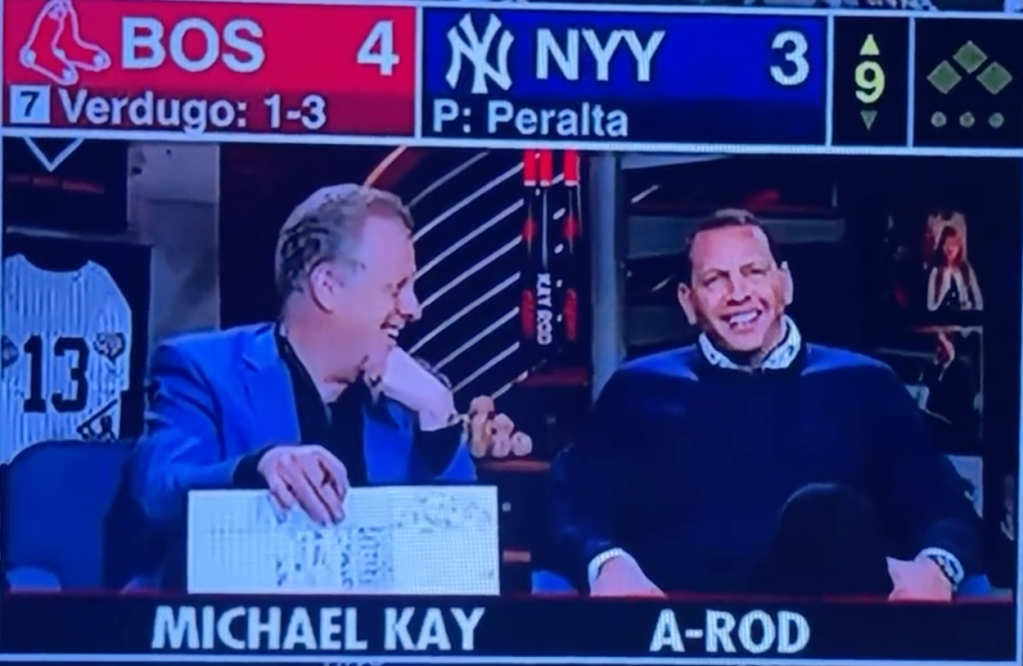 With the baseball season kicking off, ESPN debuted the new ‘KayRod Cast’ on ESPN 2 during Sunday Night Baseball. This new broadcast featuring Alex Rodriguez and Michael Kay is meant to be sort of baseball’s version of ‘The Manningcast’ that was so successful during football season with Peyton and Eli.

It remains to be seen if the alternate Sunday Night Baseball will receive even a fraction of the interest that ‘The Manningcast’ did but the first airing went pretty well. Alex Rodriguez has an invaluable wealth of knowledge when it comes to the game of baseball and his flow with Michael Kay was solid. But the highlight of the night came when Kay trolled A-Rod over Alex’s ex, Jennifer Lopez, getting engaged to Ben Affleck.

Here is a clip from Michael Kay tossing in the comment about ‘engagements’ on the fly while talking about how it’s a “happy time in the world.” Alex Rodriguez catches the thinly-veiled troll and immediately starts chuckling. Here’s the video with the full quote below:

Michael Kay fooling around with A-Rod, by subliminally brining up JLo. #Yankees pic.twitter.com/vQ0ROed5xQ

Michael Kay to Alex Rodriguez: “It’s a great time in sports. You have a new Masters champion, NBA playoffs are about to start, baseball’s in full swing, people getting engaged. I mean, it’s a happy time in the world. Happiness and world peace is what we’re looking for.”

It’s almost been a full calendar year since Alex Rodriguez and Jennifer Lopez famously called off their engagement (April 15, 2021). For anyone out there who doesn’t closely follow celebrity news, Jennifer Lopez then reconnected with her ex, Ben Affleck, and those two are now engaged.

This is the second time that Ben and J-Lo have been engaged, a fact I’m sure A-Rod is well aware of. It’s funny to see him at least be able to laugh about it on camera in that video above instead of getting weird about it. That bodes well for the future of the ‘KayRod Cast’ and the pair’s ability to throw it back and forth to each other.

Here’s the look at J-Lo’s new ring from Ben Affleck:

Congratulations to Ben Affleck and Jennifer Lopez on getting engaged🥂.

Her last engagement ring was a 6.1-carat Harry Winston diamond. This one’s green, her favorite color. And I’m sure we’ll learn more about the details of the ring in the coming days.

Alex Rodriguez joked about how much he hates A-Rod these days as a guest on the KayRod Cast:

Did anyone watch the KayRod Cast on Sunday? What’d you think? Let us know over on Twitter or in the Facebook comments!