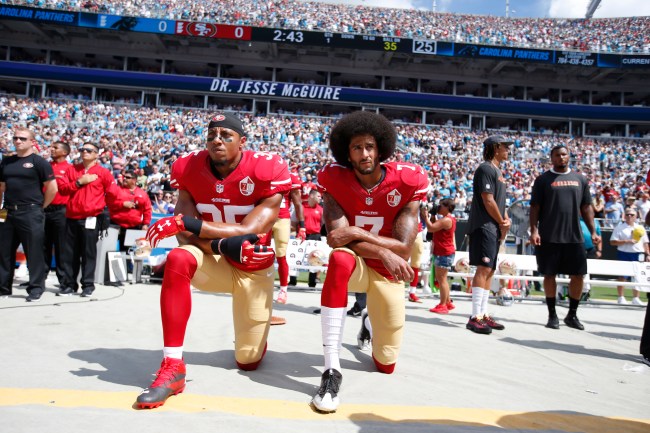 On Friday, the 2020 NFL Comeback Player of the Year and former San Francisco 49ers quarterback told Kyle Brandt of The Ringer that he felt it was tragic that Kaepernick “lost his livelihood” due to the backlash for taking a knee during the anthem. He also thinks Kaepernick was ahead of his time when it comes to athletes dealing with social justice issues.

I think [Kaepernick] was ahead of his time, certainly trying to call out social injustice, especially around police reform. The country wasn’t ready. Nobody was ready for it. And he’s sitting there trying to tell everybody through a completely peaceful manner about some of the things going on in this country that had been going on for a long time, and to see the backlash that happened, it hurts. It hurts looking back at it.

“The country wasn’t ready for it, and he suffered the repercussions with his job. . . . I mean, he lost his livelihood. . . . [It was] tragic, sad, but obviously he was incredibly brave and certainly proud of him, to even know him and what he’s done, because fast forward a few years later and I think we all were like, ‘He obviously was trying to tell us something.’”

This isn’t the first time Smith has spoken highly of Kaepernick. Last year, the WFT QB said he thought it was absurd Kaep didn’t have a job in the league.

“It was hard to kind of see that trajectory because he was playing so good, and doing things nobody had done,” Smith said on ESPN Radio. “I think he still holds the single-game rushing record for a quarterback. It was crazy.

“So with that said, it was so absurd — I think equally — that it was only a few years later when you’re like, ‘This guy doesn’t have a job.’ That was hard to imagine. It still is, a guy with his ability and his trajectory that all of a sudden wasn’t playing.”