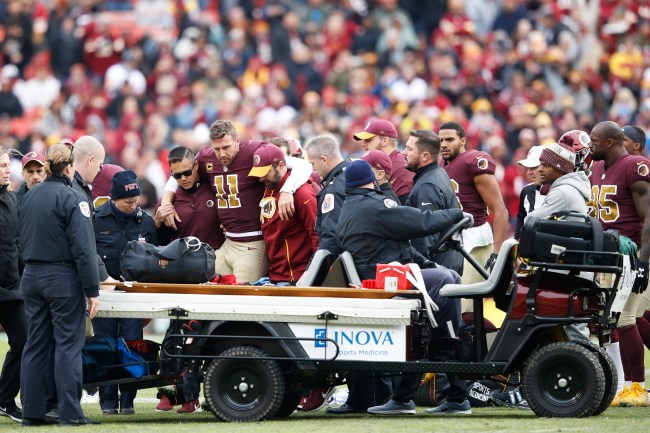 It’s been two months since Redskins quarterback Alex Smith suffered a stomach-churning leg injury against the Titans, 33 years to the day after Joe Theismann’s infamously broke his leg for the same franchise. Smith, who had led the Redskins to a 6-3 record and first in the NFC East at the time, broke both the fibula and tibia in his right leg on a third-quarter sack, instantly ending his 2018 campaign.

What’s worse is that the 34-year-old suffered an infection related to the surgery that required several additional surgeries and extended his hospital stay to four weeks. Smith was released from the hospital in mid-December, but had yet to appear in the public eye until he was spotted at the Wizards’ home game against the Pistons Monday.

.@Redskins QB Alex Smith looks to be in good spirits during his first public appearance since leg surgery 👀 #HTTR

I’m no medical professional, but it would seem that there are less janky leg injury apparatuses than something that looks like a high school science project.

Alex Smith made an appearance in the Wizards locker room. pic.twitter.com/eUDdHfgg5P

this is the contraption of alex smith's leg

he just came to say hi to the wizards players with his son pic.twitter.com/ucctkajppi

According to ProFootballDoc, Smith is wearing what is known as an ‘external fixator.’

Smith has an external fixator (a system of pins/wires with rods, like an erector set similar to the look of scaffold on the outside of a building) applied to his leg. This is necessary as the plates/screws holding the fracture were removed. A cast would not work due to the need to access the wound. The apparatus looks archaic and scary but is necessary in these situations.