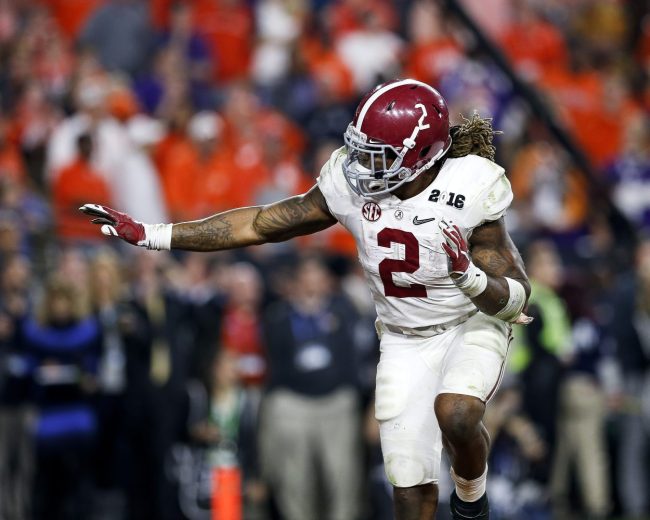 Derrick Henry is an absolute monster on the field, and apparently, a complete savage off of the field. A story from the former Heisman Trophy-winning runnin back’s time at Alabama has gone viral and it’s absolutely vicious.

Henry, a Florida-native, was a unanimous five-star recruit out of Yulee High School in Florida. His high school statistics are absolutely unfathomable and a recent graphic from New York Times shows just how difficult he was to bring down.

That did not change when he got to college.

Although he did not receive a significant amount of carries behind T.J. Yeldon and Kenyan Drake during his freshman year, he still averaged 10.9 yards per carry. As a sophomore, with Drake on to the NFL, Henry ran for 5.8 yards per carry on 172 touches and nearly eclipsed the 1,000-yard mark with 11 touchdowns.

It was his junior year where things really took off.

In 2015, Henry ran for 2,219 yards on 395 carries and scored 28 touchdowns en route to a Heisman Trophy and a national championship. He was one of the most dominant running backs in the history of the game.

Apparently, as savage as he was when he had pads on, he was figuratively running through people around campus. According to one twitter user, who is a part of ‘Gump Twitter’ and has a gi next to his name, Henry refused to take photos with anyone but women.

2015 was my favorite year at bama. I met him at the strip and asked him for a picture and he was like I only take pictures with bitches. Still my fave player https://t.co/92TBn9Ubrm

What an absolute dog. He does not care who you are or what you do, if you aren’t a woman, he’s not interested in hopping in your selfie.