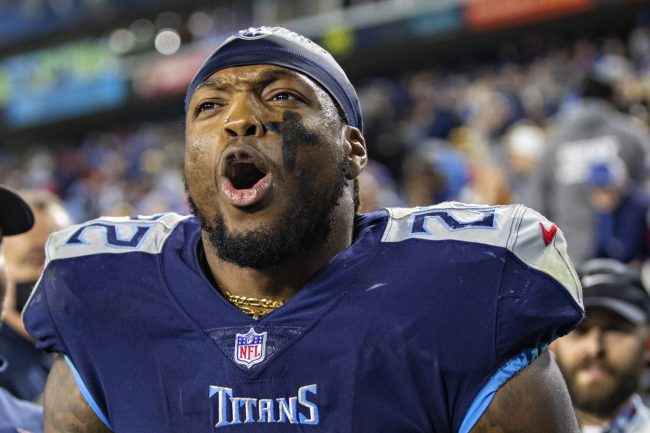 Derrick Henry was officially activated off of the injured list for Saturday’s AFC Divisional Round against the Bengals. It will mark his first game since October 31st after suffering a Jones fracture in his foot.

Despite the expectation that the injury would likely be season-ending, Henry absolutely beasted his rehab and defied the odds. He practiced for the first time on January 5th, and then somehow looked even bigger and stronger than he was before last week.

When The King got his first taste of contact ahead of the Divisional Round, he looked like he was out for blood.

With the NFL’s leading rusher from a year ago in the backfield on fresh legs in the playoffs for the first time in his career, stopping the Titans offense is going be a tough task. However, that has always been the case when Henry is in the backfield.

The New York Times did a profile on what it was like to try and tackle Henry in high school earlier this week and needless to say, it did not go well for those attempted tacklers. The stories themselves are hilarious.

Henry was close to 6-foot-3, 240 pounds as early as his sophomore year of high school. He is currently playing around 6-foot-3, 250, so he was all-but full-grown while some of his team and their opponents were only starting to hit puberty.

Over the course of his four years, Henry averaged 252.6 yards per game. His highlight tape might be considered NSFW.

In the New York Times article, one graphic stood out in particular. It is absolutely hilarious and completely savage.

The graphic shows Henry in the backfield looking significantly bigger than his teammates and opponents. On the other side of the ball, a future real estate broker Michael Cassidy lined up at defensive end. He offered an incredible quote about how much bigger Henry was than the rest and it made for one of the greatest graphics of all-time. 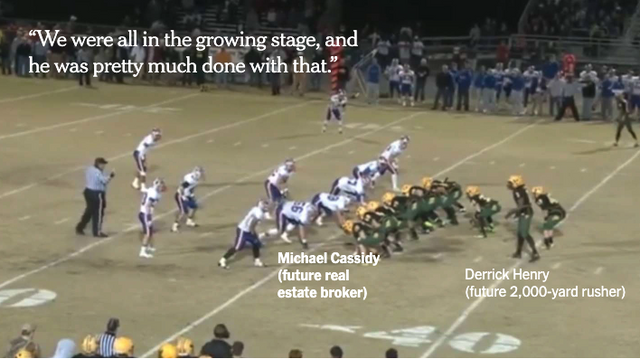 Trying to tackle Henry in high school was virtually impossible. That was the case again in college and he won the Heisman Trophy for a reason.

Now, the Bengals will be tasked with trying to take him down in the Divisional Round. Good luck.