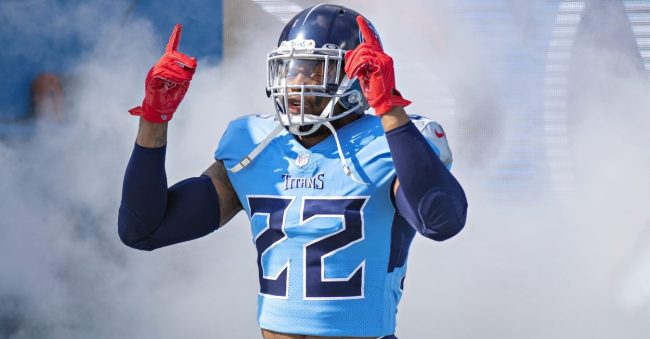 Derrick Henry is back and doesn’t show signs of stopping. After being injured on Halloween, the Titans running back has been on injured reserve for the last three(ish) months.

However, with the Divisional Round on the horizon, Henry’s rehab and recovery has been remarkable. He cleared another hurdle toward being activated prior to Sunday and appears to be on track to play.

The Titans held a padded practice earlier this week and had some of the defensive plays hit Henry as he went through drills. The intention was to give the NFL’s rushing king from 2020/21 his first taste of contact since October and to replicate some of the things that Henry would be asked to do if he plays in another game this season.

Henry practiced for the first time since his injury on January 5th and looked healthy. He ramped up his activity last week and somehow looked bigger and stronger than before.

Now, as he starts to get banged around in practice, he looks out for blood.

In his first contact drill of the day, he had two defensive players waiting for him as he ran through a hole. When Henry came through and popped the two of them, 6-foot-2, 297-pound defensive end Larrell Murchison was not ready for the force that his running back was bringing.

Henry kept getting popped throughout the day and looked like he wanted to turn his teammates into a meme, as he has so many before.

The team also had him go through all of the things that he may be required to do in a game for the first time. In addition to contact, Henry worked on his blitz pickup.

They had him taking handoffs and exploding through the hole.

He worked on his pass catching and ability to turn up field before getting met by the defense.

And they even made sure to test his foot in a situation where Henry is off-balance and has to push against opposing force applied by a defender hitting him in space.

Obviously not the exact same as game day but this is a good simulation. pic.twitter.com/uL6rG6bZ0i

By all accounts, he looked ready to go.

“(I’m) doing everything I can to be ready for Saturday,” Henry said. “I want to be the best player that I can be for this team and contribute the best that I can. Whatever I can do to help, I am always for it. … I am ready to go out there and play.”

When asked if he expects to play, he would not give a definitive yes or no but couldn’t hold back a smirk while answering the question.

Put the NFL on notice, the King seems to be coming.