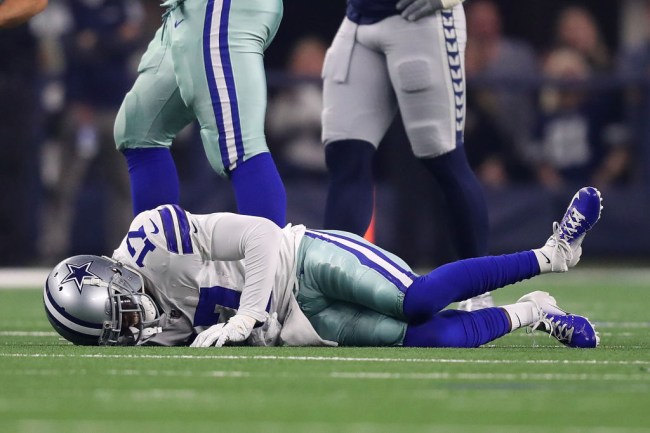 The Dallas Cowboys eked out a 24-22 win over the Seahawks on Saturday to earn the privilege of taking on the Rams in the next round of the NFL playoffs.

However, the team will be without wide receiver Allen Hurns, who suffered a season-ending injury halfway through the first quarter of the game when his ankle did things ankles aren’t supposed to do during a tackle.

If you’re in the mood to see a really gross thing and suppress the urge to vomit then you can watch the video here or check out this x-ray of the injury.

Hurns was stretchered off the field in an air cast and immediately taken to the hospital, where he underwent surgery to fix that damage that was inflicted.

Cowboys’ WR Allen Hurns already has undergone surgery on his dislocated ankle injury that ended his season, per source. As difficult as the injury was to see, Hurns is expected to be ready to return to football by August if there no complications or anything out of the ordinary.

There was an outpouring of support following Hurns’ injury, and on Sunday, he sent out a tweet thanking everyone for the thoughts and prayers being sent his way.

Truly appreciate all the prayers. If you know me you know I don’t lack having faith. I trust and thank the man above through the ups and downs 🙏🏾. Ready to attack this recovery process, Better believe I will come back on a mission.

However, there was one young fan named Luke McSawin who was particularly concerned about Hurns and wrote a letter urging him to persevere through the setback.

My friend’s son Luke was incredibly distraught after seeing @A1hurns injury last night. She said he couldn’t sleep and wrote him this letter. 😢 pic.twitter.com/KJTdA0wbNF

If you’re having trouble deciphering the handwriting of an elementary school student, here’s the full letter (I cleaned it up a little bit):

I saw the Cowboys-Seahawks game last night. I saw you got hurt. I heard you are OK. Don’t worry, you have the best doctors in the world. I prayed four times for you. You will get way better shortly.

The tweet eventually caught the attention of Hurns himself, who gave Luke a special shoutout and probably made his life in the process.

Shoutout to Hurns for staying positive in such a crappy situation.