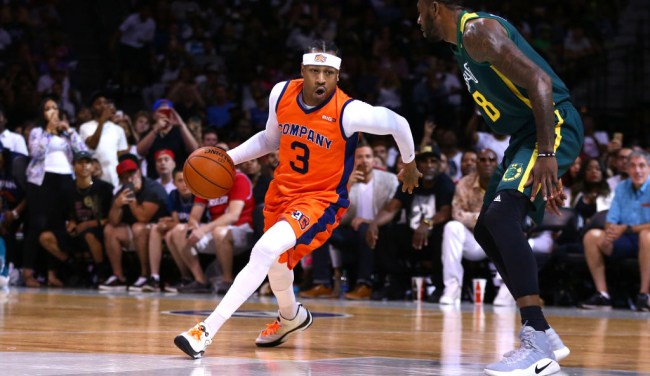 Hall of Famer Allen Iverson has reportedly had his share of money troubles since retiring from the NBA following the 2009-2010 season.

Just last month it was reported that “The Answer” owed quite a back in back taxes and recently lost his third home to foreclosure.

This despite earning an estimated $150 million in his 14-year NBA career, which doesn’t even count his endorsement deals like the one he had with Reebok.

Or I should say HAS with Reebok. Because it was revealed this month on the Bloomberg Business of Sports podcast that Iverson is still getting paid $800K a year by Reebok, plus they’ll be giving him another $32 million in 12 years when he turns 55 – half of which will go to his ex-wife Tawanna thanks to some stipulations he agreed to in a post-nuptial agreement.

So why would Reebok be not only willing, but happy, to keep paying Iverson so much money well after his days in the NBA have come to an end?

According to Reebok Chief Executive Officer Matt O’Toole, “He’s an iconic personality. Let’s get on a plane to Shanghai together. You bring Allen Iverson into a market like that. I’ll stand firmly that he has a big place in basketball and sports history.”

“He has a place in our heritage, and there is a group of consumers who want to connect to that,” O’Toole continued. “He’s relevant for a lot of our consumers.”

You know who else thinks Allen Iverson is relevant to their customers? Australian sportsbook PointsBet, who just this week announced Iverson as the face of their upcoming launch in the New Jersey betting market.

“We’re over-the-moon to work with an athlete of Allen’s caliber – when people think of AI, they think of a renegade and cultural phenomenon that was known for his flash and style on and off the court. For those reasons, we saw the partnership with Al as a perfect fit to represent the PointsBet brand,” said PointsBet US CEO Johnny Aitken. “Our forthcoming commercials show that Allen is ‘The Answer’ for more than just basketball.”

Perhaps, back in 2015, when Iverson told CBS This Morning that any speculation about him struggling financially is “a myth” he was actually telling the truth.