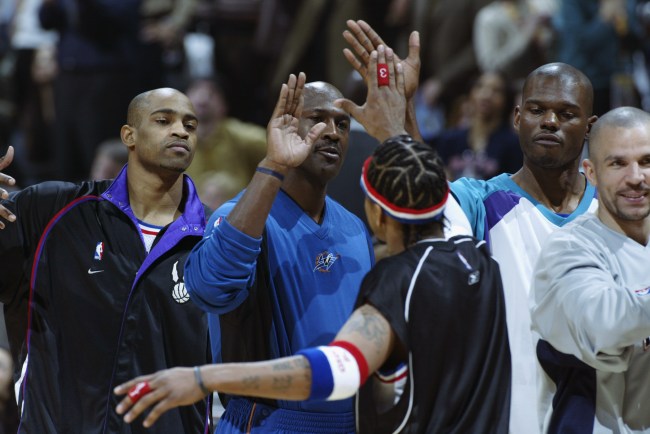 Allen Iverson is widely considered to be one of the coolest dudes to ever wear an NBA uniform. Generations of NBA players continue to laud the former MVP, with Kobe Bryant saying Iverson’s impact on the game will “be felt for generations” and Ben Simmons saying he idolized Iverson growing up.

If Allen Iverson is charmed by your coolness, you’re a cool sonovabitch.

In a recent Players’ Tribune piece, Iverson gushed over Michael Jordan’s effortless coolness with an anecdote from the 2003 All-Star Game. Iverson wore a Jordan throwback jersey to the arena to pay tribute to the GOAT, and recalled trying to find MJ to show it off.

“I go into the front of the locker room. “Any of y’all seen Mike?” Nothing.

Go into another section of the locker room. “Any of y’all seen Mike?” Nothing.

Another section. “Mike?” Nothing.

Then finally I make my way to the coaches’ office. Figure they’d have to know where the man is. Open the door…….

But there’s no coaches in there.

It’s just Mike, and man… you wouldn’t even believe this. You wouldn’t even believe what I’m seeing. It’s Mike, and he’s got his uniform on… and he’s in one of those reclining desk chairs, leaning back in that thing like he doesn’t have a CARE in the WORLD. In the world. Got his feet kicked up like he’s on some beach! And then to top it all off?? He’s smoking one of those big-ass Mike cigars.

…. ARE YOU SERIOUS!! Man, I think I’m a cool guy. I’m alright. But Mike is the only person I ever — I mean ever — met who can be so effortless in his cool that he leaves this…. GLOW. It’s almost like I’ll remember the details about that moment and then I’ll get worked up from remembering it, just thinking about how cool that man is, you know what I’m saying?”

Iverson’s Jordan story comes weeks after he revealed how MJ welcomed him to the league in 2003, saying ‘What’s up, you little bitch?’