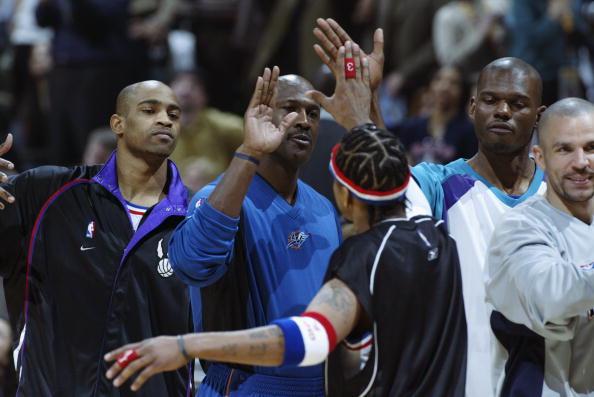 Earlier today Complex released an extensive interview with basketball legend Allen Iverson where he talked about everything from meeting the Notorious B.i.G, to his relationship with Michael Jordan, and how he inf

One of the best stories in the interview is how Iverson says Michael Jordan used some NSFW language to greet him into the league.

The first time I ever talked to him was that year playing in the rookie game, I’ll never forget it because he said “What’s up, you little bitch”, I looked at him like alright man.

Despite acting like a tough guy, Iverson admitted that he was star struck the first time he faced MJ on the court.

Iverson expanded on how Jordan would never let him forget how he crossed him up.

A.I. was proud of his crossover moment over Jordan.

I always knew that when I got into the league I was going to try my move with the best, he was just a victim that night

To this day Iverson crossing up Michael Jordan is one of greatest moments in NBA history.

Iverson crossing up Jordan then hitting the jumper on him. Great defense by MJ, hell of a shot by AI. One of the most legendary moments in NBA history. Mike wasn't scared to guard the other team's best player during a pivotal play of the game, he wanted to. That is Greatness. pic.twitter.com/CiOknjBszw