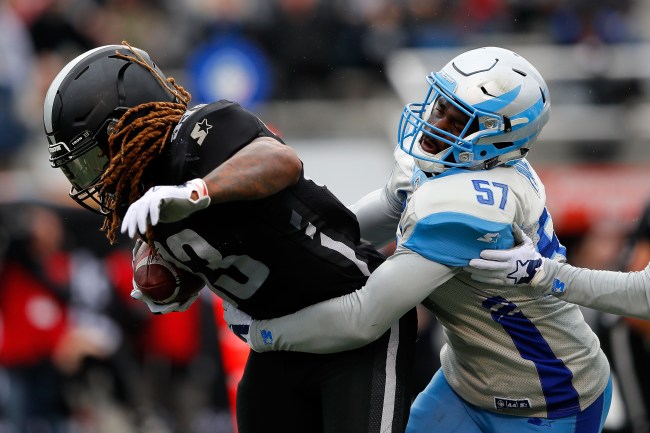 Now that the Alliance of American Football (AAF) league has officially folded, we’ve heard lots of horror stories about some of the players in the league being stranded, racking up unknown hotel bills and being forced to pay their way home from cities where they were playing. It’s a mess, and pretty sad to see from a league that had actually gotten a lot of positive reviews from people.

Unfortunately, when the league shut down, so, too, did all the affiliations that any player had with the league, meaning that, if a player got hurt and needed surgery or rehab, he would need to pay out of his own pocket. Well, that’s what would have happened to Gionni Paul, a linebacker for the since defunct Salt Lake City Stallions.

In his team’s final game before the Alliance of American Football closed its doors, Paul snapped his forearm while trying to defend a pass play, resulting in two broken bones. The surgery happened on Sunday — and required 15 screws and two metal plates to put his arm back together — but because the AAF is no longer active, he’s on the hook for the remaining medical bill. Talk about bad timing, right? This happened 72 hours before the league ended.

Have no fear, though, because the Internet is here. Thanks to a fan of Gionni Paul’s, some guy started a GoFundMe to help assist with the linebacker’s bills, with the goal of $3,000 all but met (as of press time). Here’s what the description of the fundraiser reads.

Thanks everyone who has shared and donated so far! $600 in 8 hours not to bad at all! I’ve been in touch with Gionni and he is very thankful for any and all help and he could really use it! Once again Gionni did not ask for this, I just set it up because I figured he could use the help and I appreciate all his hard work on and off the field! Keep sharing and let’s hit our goal! Thank You All!

That’s pretty awesome, so here’s to the person who started this thing, because the former Alliance of American Football player has to be grateful. To think he left that much impact on a fan in just eight games is amazing.

As for how bad the injury is that Paul suffered last weekend, well, it sounds pretty gnarly hearing him describe it. This is what he said to the Washington Post earlier this week.

“I’ve seen better days,” Paul told the Washington Post this week. “My forearm went Jello,” Paul said. “I knew it was broken then. I went into shock. I started sweating. I’m the kind of person that’s got a high pain tolerance. I knew.”

Nasty. Thankfully, Gionni Paul’s bank account won’t require taking similar pain to pay off the medical bills thanks to the support of some kind fans.