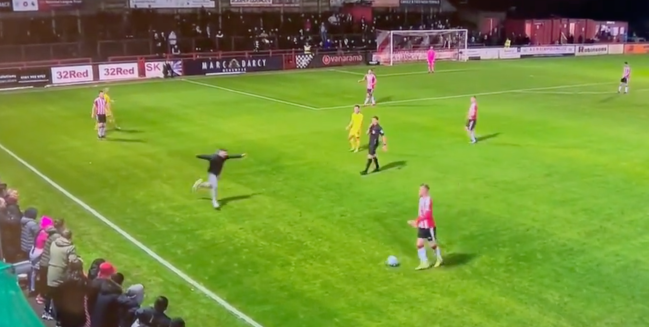 In a world where flops and dives are extremely common in men’s soccer, the art of tackling is still alive and well. During a recent match in England’s fifth division, a rogue supporter burst onto the pitch and delivered a textbook challenge to win the ball.

Obviously, it didn’t count, but the effort was tremendous.

As Solihull Moors hosted Altrincham on Monday, the visitors were up 2-1 with a minute left. They regained possession through striker Adam Rooney and looked to take down the clock and hold onto the one-goal win.

However, a fan of the Moors did not appreciate the time-wasting attempt. Out of nowhere, he legged it onto the pitch from the left touchline and slid in to clear the ball away from a startled Rooney.

Although the play was whistled dead, the fan quickly hopped to his feet to try and win the second ball.

I love everything about this. This fan was frustrated with his team losing and tried to take matters into his own hands.

He was tired of the opponents’ time wasting and wanted to

My favorite part is after the whistle. With the game very clearly stopped, he raised his arms as if to say “WHAT DO YOU MEAN?!” which is such a great reaction, just pretending that what happened was totally normal.

And then ran back toward the stands to celebrate his efforts, despite his team’s loss. What a fantastic sequence of events for a fan who is forever a legend.