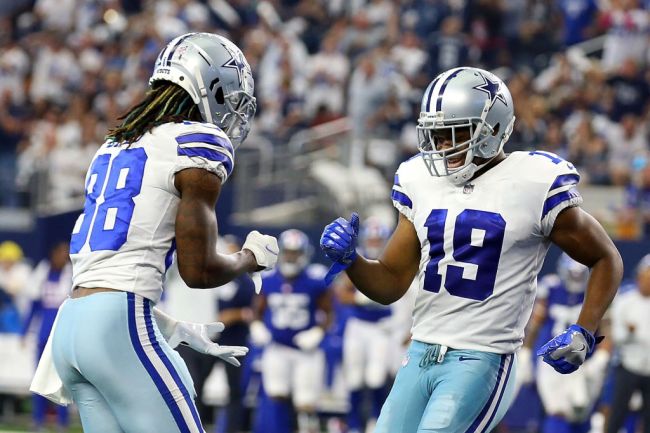 CeeDee Lamb has only been in the NFL for 18 games but he has already given quite a bit of money back to the league. According to ESPN’s Adam Schefter, the second-year wide receiver has been fined five times in 2021 and his teammate Amari Cooper thinks it’s hilarious.

According to Schefter, Lamb has been fined a total of $46,865 for various reasons. Of course, as is with most things in the No Fun League, some of the fines are ridiculous.

Lamb has been fined twice for having his jersey untucked. The first offense cost him $5,150 and the second $15,450. The NFL triples the fine with each successive offense, so it it happens again, he will be fined $46,350.

Additionally, Lamb received a $5,150 fine for having socks that failed to cover his lower leg in a game. He also had fines for taunting and for an illegal crackback block.

Lamb signed a four-year, $14 million contract with the Cowboys, so in the grand scheme of things, his $47k in fines is not a significant amount.

Amari Cooper still had a laugh at his expense:

“I’ve never seen a player so young get fined so much,” Cooper told 105.3 The Fan in Dallas this weekend. “He’s gotten fined like every week. It’s very confusing to me. I’m like, ‘Do you like money? Do you like getting paid?’”

NFL players can appeal fines, either by claiming that they did not commit a violation or by claiming the monetary amount of the fine is excessive relative to the player’s salary. In Lamb’s case, neither of those things are likely true and it’s unclear as to whether he has appealed any of his five fines.

Either way, Cooper — who is a seven-year veteran — rhetorically asking his young teammate whether he likes money and getting paid is a hilarious, all-time quote.

To put the $46,350 in perspective, Lamb could purchase the following with money he gave back to the NFL:

That might be chump change to Lamb, but think about the party he could throw if he just gave into the NFL’s ridiculous rules and wore different socks.