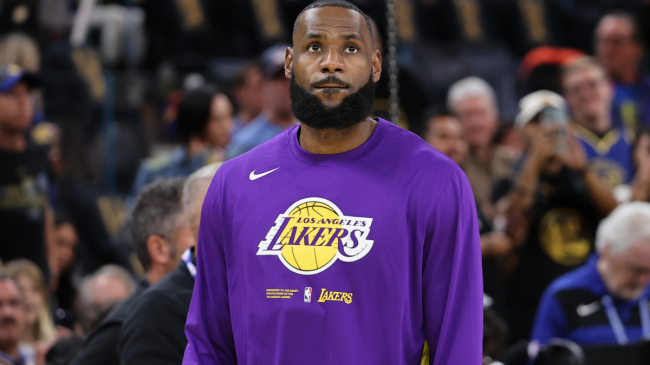 Amazon Prime had a major announcement on Thursday night regarding an upcoming broadcast of Thursday Night Football. The streaming service will team up with LeBron James and members of his podcast The Shop as they look to capture their own version of ESPN’s Manning Cast.

The NBA star is an avid football fan, and he actually had the opportunity to play at the college level had he chosen to do so. He was rated as the No. 1 overall prospect in the state of Ohio coming out of high school. James ultimately chose the basketball route, which was obviously the right call.

Amazon has been the official streaming service for Thursday Night Football this season, which has brought upon… mixed results. A number of TNF broadcasts have been snoozers, though last week’s Saints-Cardinals matchup didn’t disappoint. To spark the interest of viewers, the service is bringing in stars from the entertainment world.

Last week, we saw Taylor Swift tease her recently released album, Midnights. That cameo had a number of fans outside the football world excited to tune in. Now, they’ll turn to the NBA for its next partnership.

LeBron teased the upcoming Amazon appearance on social media, saying he had “something special coming” for the fans.

NFL Fans, I got something special coming for y'all!! Announcement coming on
IG Live at some point today! 👑🏈💈

Amazon will attempt to use LeBron and ‘The Shop’ crew in a similar fashion as ESPN uses its Manning Cast.

Monday Night Football has seen Peyton and Eli Manning team up to provide both analysis and entertainment to viewers. The duo brings on notable guests to interview during action, most recently providing a lineup of Barack Obama, Bill Burr, and Vince Vaughn for the Bears-Patriots matchup.

It sounds like Amazon Prime is hoping to do the same with The Shop.

“We are live from The Shop… We get to talk football, like the late, great Madden, like all the analysts that do the game. We love football, and for us to have this moment… it’s incredible.”

LeBron says that the crew will be on hand for the November 17th matchup between the Packers and Titans. Viewers will have the option to watch either the typical broadcast or LeBron’s.

Joining James will be Maverick Carter, Paul Rivera, and guests.

Fans were quick to react, comparing it to the product we’ve seen this season on ESPN.

One person wrote, “LeBron doing a version of ManningCast. (Lowkey actually interested in seeing him with a live mic where anything potentially controversial can’t be edited out.)”

LeBron doing a version of ManningCast. (Lowkey actually interested in seeing him with a live mic where anything potentially controversial can't be edited out.)

Wonder if Omaha Productions would ever have Peyton Manning do a version of The Shop…Who would be dream guests? https://t.co/6ajom6AUK9

Another is hoping this can extend past James’s time in the NBA, saying, “I’d love to see LeBron do a Manningcast style show for NBA games after he retires. Guess we’ll get a taste at what it could look like here.”

Stephen A’s World during the game last night was entertaining, but I’d love to see LeBron do a Manningcast style show for NBA games after he retires. Guess we’ll get a taste at what it could look like here https://t.co/5aTPspIT8A

Manning Cast has brought a different experience to NFL viewers. We’ll see if Amazon can do the same.