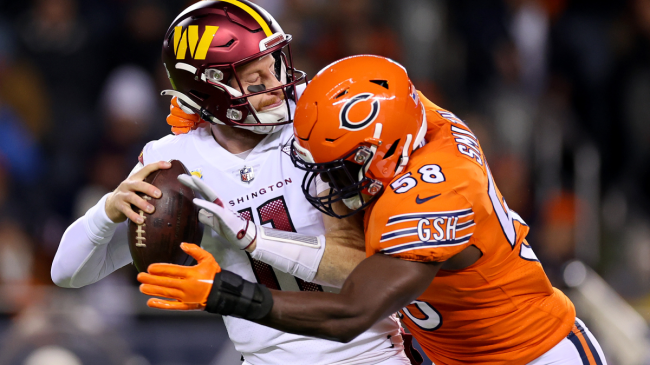 The Bears and Commanders game has been so bad that one sportsbook is paying out TNF bets early. At halftime, in fact.

PointsBet has decided to not to even worry about the second half before honoring their under bettors’ tickets on Thursday night. And why would they?

This game has somehow lived up to the minimal expectations set. And the bar was set LOW.

It’s been as terrible as the Broncos-Colts game we saw last week. We said it couldn’t get worse, but somehow, it did. Broadcaster Al Michaels joked about retiring early following that pitiful performance, but this game might actually make him call it quits.

Through the first 59 minutes of play, not a point was put on the scoreboard. Washington finally tacked on a field goal before the break.

The under was set low at 38 points, but the sportsbook didn’t think we’d see five touchdowns scored in the second half of the game.

Happy bettors are rejoicing amid this awful TNF game.

A number of happy gamblers got to celebrate their wins early. Many are heading over to social media to post their reactions.

One Twitter user said, “PointsBet out here taking Ws.” I assume they played the under 38 and got the early reward.

This fan joked, “We should all get something for having to watch this unfortunate game.” Can’t say I blame him.

We all should get something for watching this unfortunate game 😂

This fan agreed, saying, “This makes the game better for sure.”

Another Thursday night, another snoozer. Next week’s TNF matchup is Saints vs. Cardinals. Maybe things will get better? At least one sportsbook is working to make the action a bit more entertaining for viewers.